As Above So Below: An Average Thriller that Teases Greatness 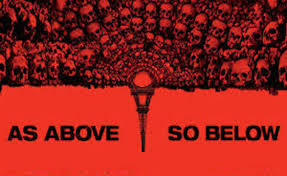 
Horror films are one of the more beloved genres in the modern movie industry. Now more than ever before, film makers are looking for ways to re-invent the genre and find new ways to induce chills and thrills into their devout fans. Dating back to the 90’s, the unforeseen popularity of the Blair Witch Project allowed film makers a new way to deliver their stories to audiences. The Blair Witch Project assembled a very simple formula that has since been repeated in a number of films since its release. The use movie induced the usage of unknown actors and a reality like camera angle helped to re-invent the way the delivery of the story. This cost effective and highly successful ploy has helped the horror genre and spurn countless numbers of films in its mold. Apollo 28, Open Water, and Afflicted are just a few of the films who have come into existence over the years using the same mold. 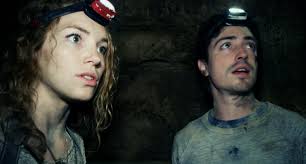 As Above So Below is a disconcerting, spooky manifestation that entails a search for one of the mythical treasures of the earth, the philosophers stone. It’s a little known thriller that hit the theaters in relative anonymity in early 2014.The movie has good intensity in the early moments that is maintained throughout. It’s billed as a horror/suspense feel but it really has a Raiders of the Lost Ark/National Treasure feel to it. The film stars Perdita Weeks (Prowl), Ben Feldman (Cloverfield), Edwin Hodge (The Purge), and Francois Civil (Frank).


Synopsis: When a team of explorers ventures into the catacombs that lie beneath the streets of Paris, they uncover the dark secret that lies within this city of the dead.


The film has a really good theme that speaks to nearly everyone that takes the time to view it. As Above So Below is a journey into self-regret and sorrow that forces one to recognize your sins and inner demons. It’s a horror/suspense feel that has universal appeal. While the film may not have the best delivery to the story, it clearly has one of the more interesting and relatable themes in some time. It really grabs a hold of your intention almost immediately. The audience is sucked in and then you’re as intrigued by the quest for the Philosopher’s stone as the protagonist is. Its engulfing nature won’t allow you to turn away for the first 30-40 minutes. However, somewhere about the midpoint of the film, that grip begins to ease up and the film quickly falls to mediocrity.


One of the most glaringly noticeable aspects of this film is its choice for cinematography. The film is yet another to induce the first person camera angle in an effort to give this tale a fresher feel. It’s a way that is becoming more and more popular in recent film making.  As Above So Below is told from the first person documentary style perspective that has worked for some film like Cloverfield or the Blair Witch Project but hampered others like Apollo 18 or Afflicted. Much like the division of success in those aforementioned films, this films choice of the perspective has mixed success. In the early stages it really puts you in the middle of the film even giving it an adrenaline inducing feel that preys on one’s natural fears. Conversely, the camera choice hurts the climax of the film. It has far too much rapid movement and quickly hampers the enjoyment of the film.


The film’s cast is comprised of mostly unknowns. It’s a formula that seems to go hand in hand. It’s been instituted in most of the films that uses the style of cinematography. The cast is led by Perdita Weeks who does an admirable job in her performance as Scarlett. Just as like most of the films that have attempted this style, it’s comprised of mostly unknowns or actors aren’t readily recognizable.


As Above So Below is a film that is surprisingly better than I expected. I was actually shocked how locked into it was for a good part of the movie. I think if it would have had a better camera choice then the film would have turned out significantly better. It’s creates a good level of tension and anticipation that is maintained throughout. It’s a film that in spite of its glaring shortcomings, you can still find a good level of enjoyment. For pure horror lovers, it may fall short, but for most everyone else the film will stir some stark tension within you.
Posted by Da'Mon at 1:16 PM 5 comments:

Afflicted: A Refreshing Perspective on one of the most popular characters in fiction


The horror genre is one of the most popular among movie lovers. However, it is one of the most difficult to keep fresh and relevant. Filmmakers are constantly in search of new ways to induce scares and chills as their audience views their material. One of the newer ways that filmmakers are looking to infuse some creativity into the genre is the use of the first person perspective when it comes to movies. Ever since the success of the Blair Witch Project, Hollywood has been finding ways to re-invent the use of the camera perspective. 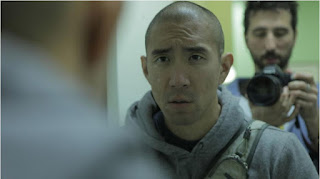 Afflicted is intriguing, innovative occurrence that ingeniously institutes a new perspective on one of the ageless characters in all of fiction. It brings a hyper realistic touch to the vampire genre through the combination of the use of new age cinematography, a reality show approach to the delivery of the story, and finally a touch of much needed realism being added to the story. The film stars Derek Lee (No Backing Out), Clif Prowse (1st film), and Baya Rehaz (Blue is the Warmest Color). The movie debuted in 2013.


The film is makes for an interesting new outlook on the vampire genre. It has a riveting viewpoint on one man’s transformation into the revered character. It’s one of the better Vampire films that isn’t as good as some of the other Like Byzantium and Let Me In but it does make for a good watch.  Afflicted has a very humanizing approach to one of the greatest characters in cinema. The way that it’s presented to its viewers allows its viewers to live vicariously through its characters. The first thing that stands out about Afflicted is the director’s choice of camera perspective. Afflicted implements the use of the now popular documentary style story that is becoming popular. It makes for an interesting perspective to the story added a higher level of realism, however, it doesn't truly do the story justice.


One of the biggest detractors from the film is that the first 15 minutes are nearly worthless. The film could have easily been better served by eliminating these. The filmmakers tries to establish the characters and the closeness of the two main stars but it’s very boorish. It nearly loses your attention and forces you to question why you are watching this movie. Soon after it does pick up and then it finally begins to live up to some of the promise of the trailers. It begins to take the shape of a very unique outlook on one of the most popular figures in movies.


The cast is consist of mostly unknowns. Derek Lee and Clif Prowse head the films and star as themselves. Both do a good job however their novice acting skills really are magnified as the film progresses. Because of the limited acting ability, the film doesn’t achieve the level of enjoyment that could have been reached had there been better actors.


There is an unwavering, timeless infatuation that fiction lovers have with Vampires. They are some of the most popular characters in movies and fiction. The public seems to never grow weary of them. Afflicted helps to add to the genre with a different approach. Fans of the character will surely enjoy this more than those who aren’t. It’s surely not a classic but it does offer a good level of entertainment with its very unique perspective on the characters. While this film could have been better, it is surely more than enough to offset a boring night.