Black Swan: "An Entertaining, Twisted, Drug Ride of a Movie" 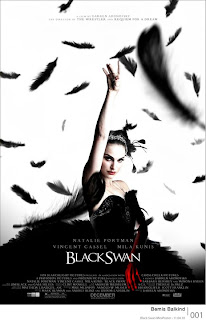 Black Swan is a bizarre, intriguing but muddled tale of obsession, desire, sacrifice, passion, and most of all a fixation with perfection. The movie features an impressive performance by Natalie Portman (Brothers) and some high-quality supporting performances by Vincent Cassell (Eastern Promises), Mila Kunis (The Book of Eli), Winona Rider (Star Trek 2009) and Barbara Hershey (Falling Down).

Black Swan is a multi layered materialization of a young woman’s obsession. It’s an emotional journey of a young woman chasing a lifelong passion that has become fanatical. The movie aptly illustrates the struggles within herself and the immense amount of pressures that are placed on her which causes her to lose touch with reality in her neurotic pursuit of becoming the lead in a Broadway ballet. 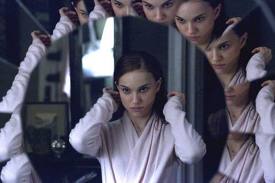 The movie is one of the weirdest films that you’ll ever see however, it is a touching, engaging story that aptly exemplifies the degree that ballerinas go through to achieve a childhood dream that often becomes a life long passion. Black Swan opens with a great scene illustrating the detailed, painstaking process of preparation. It contains multiple scenes showing her feet that are filled with scars, cuts, and bruises to accentuate the sacrifices that ballet dancers are forced to overcome in their surrender to their craft.

Natalie Portman gives a riveting performance as she portrays Nina, a repressed, shy, little girl trapped in a woman’s body. She has been emotionally repressed because of her overbearing mother, who constantly treats her like a little girl. Nina is terrified of her mother, after being forced to chase her mother dream, having been made to feel guilty because she birthed her at the age of 28 and sacrifice her dancing career. Nina constantly seeks her approval just like a teenager. Portman delivers an extremely convincing depiction of a young woman with an neurotic obsession with perfection. The eloquent portrayal of her character’s gambit of emotions is very impressive. Nina develops a dual personality because of a number of influences. The pressures of the pursuit of perfection, the fact that she scars herself in order the alter her perfect appearance, and the constant inner battle to keep her inhibitions in check. This causes her to repress her personality. Another impressive aspect to Portman’s performance is the fact that she does most of the ballet dancing herself. Mila Kunis adds a good performance as Lily, the uninhibited newcomer, that threatens to upstage Nina. Vincent Cassell also supplies a commendable performance as Thomas, the promiscuous director of the Ballet.

The film does a great undertaking at trying to connect the audience with Nina’s level of psychosis. She is unstable emotionally and the movie goes through great lengths to try to get the audience in her head. The cinematography and soundtrack of Black Swan is excellent. They both enhance the film very well. It’s visuals are excellent and has dual purpose. Much of the cinematography is used to convey her feelings. Nearly every scene in the movie is used to convey her emotional state within the movie. Multiple camera angles are used to resemble her emotion state. One angle in particular that is used is from behind Nina. Many of the scenes are from behind Nina, this allows the audience to share Nina’s feeling of her instability and her level of insecurity. The final ballet scenes were terrific as Nina dances transforming from the White Swan into the Black Swan was impressive. The soundtrack was equally impressive as it plays just like a ballet, especially in the most tense moments. The music raises and lowers highlighting the action of the film giving the true feel of a ballet. 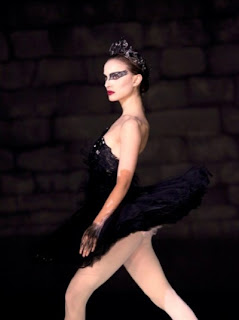 Black Swan is extremely dark. Almost twisted in nature. The movie is actually pretty decent but it an exceedingly hard film to watch. Too much of the film plays out like you are on drugs, It’s all over the place. This was the only detractor from the movie. It’s truly difficult to discern what is actually the reality of the film and when it’s Nina twisted perception of reality. The movie never makes it clear. It constantly flip flops between the two and you are constantly trying to make sense of what is going on. This lack of clarity is the only extreme hindrance of what is a good movie but could’ve become a great one.
Posted by Da'Mon at 8:00 AM