Knight and Day: "An Extremely 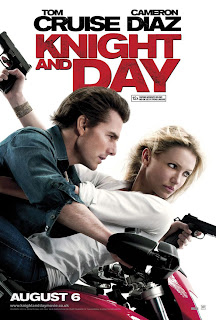 Rating:
****
By: Da’Mon Guy
Knight and Day is an extremely enjoyable, terrific intermingling of action and comedy. It’s an action packed film that never bores and is easily one of the most entertaining movies of 2010. This the second film to unite the duo of Tom Cruise (Mission Impossible trilogy), and Cameron Diaz (The Box). The film also features Peter Sarsgaard (Orphan), Viola Davis (Eat Pray Love), Jordi Molla (Bad Boys 2), and Maggie Grace (Faster).

On the way to her sister’s wedding in Boston, a woman has a chance meeting with a man who turns out to be a rouge agent and turns her life upside down.

Knight and Day is a very entertaining film. The film aptly intertwines action and comedy superbly. The movie has an extremely light hearted nature that enhances the comedic aspect of the film but it doesn’t detract from the seriousness of it either. It’s a rarity that occurs in these types of film. Knight and Day eloquently handles the delicate balance of the two, merging the two of them very well to present a very enjoyable movie.

Tom Cruise and Cameron Diaz are at their best in this film that is one hundred times better than the last movie that they teamed up to do (Vanilla Sky). The chemistry between Cruise and Diaz is magnificent as every scene that the two of them are in sparkles. Tom Cruise still has the charisma to make the movie work with his dialogue and the physicality to make this movie work as well as he his with his prior action performances. Diaz was in top form as the reluctant side kick, June Havens. Her smile still captivates and as well as her “Valley Girl” personality. Cruise stars as Roy Miller, an apparently rouge agent with a penchant for being unspeakably calm no matter the situations. Cruise’s comedic timing was impeccable. Roy’s repeated greeting of “Hi June” to Diaz‘s character was terrifically well timed and very amusing. The film takes off right after Roy and June's chance meeting, or so it appears. From there, the movie takes off and never stops. The action of the movie is terrific.

Knight and Day has a really sweet love story submerged within the comedy and the action. The movie is really about a chance encounter between two individuals who are a point in their lives where they both are seeking to satisfy unfilled opportunities and desires. Their first conversation exhibit’s the longing the two of them have for that special someone as they share their “bucket list.”

The film uses the initial flirtatious encounter between Roy and June as a basis for their romance and never moves it too fast. The budding romance between Roy and June isn’t forced or over the top. It had a more genuine feel to it. The movie makes the focus of their romance on what it may become and not on the immediate. Their attraction to one another was key for much of the movie and this perspective adds to the mysterious nature of Roy’s character. It breaks the usual “James Bond” jump into the bed with the spy cliché. It slowly develops their attraction throughout the film, allowing it to cultivate between them as opposed to many films that force the situation for some quick illicit sex scene. It never goes too far as it always borders flirtation. This approach gives the audience a more satisfying conclusion to the movie.

I don’t know why Knight and Day got such a bad rap over the summer. This a fun movie to watch. You’ll enjoy this film throughout just as I did. The film is full of action and the comedy is well placed. No aspect of this film will disappoint. It was easily one of the better films of 2010. This was ten times better than the other couple spy movie (Killers) that come out earlier this year. Knight and Day is a movie that will only get better the more times you see it.
Posted by Da'Mon at 8:42 AM