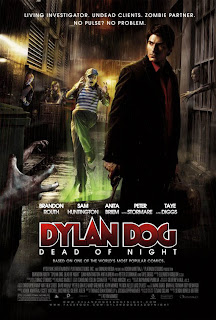 Rating:
***
By: Da'Mon Guy
﻿
Dylan Dog: Dead of Night is a fairly entertaining, pedestrian film that attempts to merge an old school detective film with the elements of the supernatural. The film is the story of the undead and members of the supernatural who walk in shadows amongst the living. The movie stars Brandon Routh (Superman Returns), Peter Stormare (Constantine), Sam Huntington (Superman Returns), Taye Diggs (Basic), Anita Briem (Journey to the Center of the Earth), and Kurt Angle (Warrior).


Dylan Dog: Dead of Night is a moderately enjoyable film that is very reminiscent of the Carl Kojak: The Night Stalker television series. The movie is based on a comic book, Dylan Dog, by Tizano Schalavi that was released in 1986. It is told in the mold of an old school style classic, vintage detective stories with a voice over by Dylan Dog. The film is laced with bouts of senselessness and ridiculousness that accentuate a tale of the undead and the afterlife. A zombie support group, a body shop with human parts, and even a humorous take on the use of hotdogs, all make an appearance in this supernatural aberration.