Rating:
***
By: Da'Mon Guy
Sucker Punch is an imaginative, action oriented manifestation that attempts to infuse a cutting edge visual onslaught as subterfuge for a disjointed story that lacks cohesion and never makes any sense. The film stars Emily Browning (The Uninvited), Abbie Cornish (Limitless), Jena Malone (The Ruins), Vanessa Hudgins (Beastly), Jamie Chung (The Hangover pt. 2), Carla Guino (Faster), Oscar Issac (Robin Hood), John Hamm (The Town), and Scott Glenn (Secretariat). It’s directed by Zach Snyder (The Watchmen).
Sucker Punch is a collection of vibrant, intense images that mask the inconsistent and incoherent story. It is, however, one of the most imaginative movies that you will ever encounter. The film is a ground breaking assemblage of great visual effects that are forcibly conjoined with a accumulation of senselessness. The movie filters in a multitude of elements to incorporate the viewer into the concept that this is the fruition of a young girl’s imagination. The film throws everything but the kitchen sink into the picture. 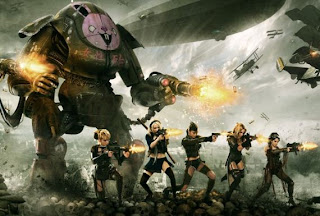 The biggest downfall of Sucker Punch is the lack of cohesion to the stories. Sucker Punch occurs in three separate realities but neither relate to one another or make any sense. The film is almost three different stories that have little to no connection. Each story moves forward but is barely connected to the prior. As amazing as it appears on film, the action of the film really has no place in the movie. The movie never shows what is going on in reality as Baby Doll creates this world filled with these fantastic sequences. That was a clear detractor as a return to reality would’ve helped to explain certain aspects of the film.

Sucker Punch is a mirage that never returns the main story or makes any reference to the main story of the film which completely offsets the rest of the movie. Sucker Punch only references the circumstances within the insane asylum in the opening moments and isn’t seen again until its waning moments. The lack of relation to the primary story waste the breathtaking visuals and action that are visualized as Baby Doll delves deeper into her subconscious. As the audience is drawn into deeper into Baby Doll’s psyche, the story makes less and less sense. 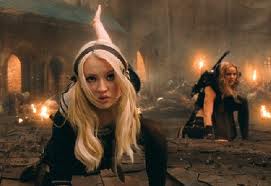 Sucker Punch’s greatest asset is it’s great cinematography. The film is filled with powerful dramatic imagery. It is visually amazing. The great action and visuals are completely astonishing, they almost make up for the senselessness and stupidity of the film. 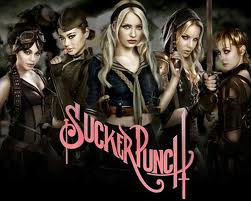 Sucker Punch isn’t a movie about performances. The film is more of a showcase for the radical imagery that it infuses as opposed to the performance of each of the actors. Young Emily Browning does about as good of a job as possible within this type of film. The lack of acting is more of a result of the script as opposed to the talent of the young actress. Conversely, Oscar Issac does a good job as Blue, the story’s atagonist, the events of the story coupled with his performance clearly compels the audience to hate him. In addition, Scott Glenn, who takes the role of Baby Doll’s conscience/ mentor, simply known as “The Wise Man”, and has a number of witty lines that enhance the enjoyment of each of the action stories. 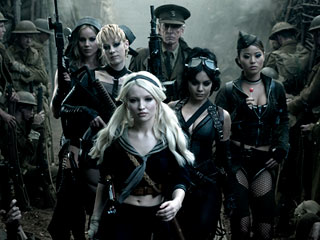 If you ever wanted to materialize a child’s over active imagination then you would come up with Sucker Punch. The film is a visual masterpiece that was director Zach Snyder’s chance to make a great action movie with little to no direction or and even less of a story. The film has an insane amount of great action with nearly no plot nor purpose. It is the biggest collection of images and mismatched characters to be placed in a single film. Samurai, dragons, zombies, Nazis, and robots, all appear within the framework of this devastating catastrophe. A ridiculous waste of some Intense cutting edge action without any true purpose or reason. One of the tag lines associated with the film was that reality is a prison and Sucker Punch truly embellishes on that concept as the film is a fantastic visualization of Baby Doll’s incredible imagination. Sucker Punch is clearly not made for anyone who enjoys a sensible story. The film instead plays out like the latest PS3 video game. Too much of the film is focused on the action and not enough on the compelling story that it starts with. Sucker Punch is a great movie if you are 13 but for those that are more seasoned then Sucker Punch will fall short.