The Conspirator: An Entertaining, Enlightening Perspective to the Lincoln Assassination 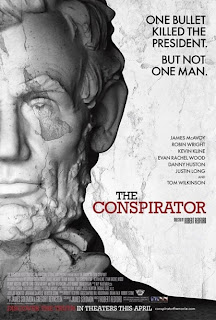 Rating:
****
By: Da’Mon Guy
The Conspirator is a compelling, performance driven drama that offers an insightful, alternate perspective to the events which led up to and followed the assassination of president Abraham Lincoln. The film delves into the theory that the Jon Wilkes Booth was not the lone proprietor of the sinful act. It’s a fictionalized reconstruction, that is based on true events, which focuses on the trial that surrounded one of the accused conspirators, Mary Surratt. The movie features an all star cast that utilizes the talents of James McAvoy (Wanted), Robin Wright (State of Play), Tom Wilkinson (Michael Clayton), Danny Huston (Edge of Darkess), Justin Long (Going the Distance), Alexis Bliedel (Post Grad), Evan Rachel Wood (The Wrestler), Kevin Kline (No Strings Attached), Toby Kebbell (Rock-N-Rolla), Johnny Simmons (Jennifer‘s Body), and Colm Meaney (Law Abiding Citizen). The Conspirator is directed by Robert Redford.

Click the following link for the full review:
http://www.examiner.com/movies-in-baltimore/movie-the-conspirator-an-enlightening-perspective-to-the-lincoln-assassination-review
Posted by Da'Mon at 10:02 AM