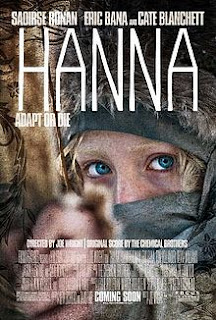 Rating:
**1/2
By: Da’Mon Guy
Hanna is a cruel joke. The film is a disappointing, misguided coming of age story whose trailer seduces its audience into believing that it will be some sort of action thriller but instead it’s a muddled tale of revenge that completely fails after the first 30 min. The film stars Saroise Ronan (The Lovely Bones), Eric Bana (The Time Traveler’s Wife), Cate Blanchett (Robin Hood), Tom Hollander (Pirates of the Caribbean 2 &3), and Vicky Krieps (House of Boys).


Hanna is a misleading, regrettable experience that induces a tremendous level of disappointment. The story has a number of good intentions but fails to establish continuity, giving it an incoherent feel. Hanna begins with a tremendous opening, it quickly lays the foundation for a great action flick as we bear witness to Hanna’s abilities. You witness the.....See the full review at:
http://www.examiner.com/movies-in-baltimore/hanna-a-cruel-prank-that-tragically-wastes-good-acting-review
Posted by Da'Mon at 6:25 AM