Dinner for Schmucks: "A Moderatley Entertaining Comedic Happenstance that Teeters the Line of Being Hilarous and Being Utterly Deplorable" 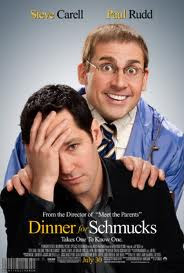 ﻿Rating:
***
By: Da’Mon Guy
Dinner for Schmucks is a moderately humorous happenstance that blurs the line of being an enjoyable, amusing comedy and an humorless mind-numbing absurdity. This muddled experience is a humorous attempt to ridicule the more oddly eccentric characters within our society. It stars Paul Rudd (I Love You, Man), Steve Carell (Date Night), Stephannie Syzostak (The Devil Wears Prada), Zack Galfinikas (Due Date), and Jermaine Clement (Despicable Me). It also features Bruce Greenwood (Star Trek 2009), Lucy Punch (Hot Fuzz) in lesser supporting roles.

After an executive is fired, an aspiring financial advisor seeks to assume his position. He quickly convinces his boss to allow him the opportunity to gain the position he covets but with conditions. He must attend a monthly dinner with the rest of the corporate yuppies, however there’s a catch, the dinner is a chance for the yuppies to mock at the less fortunate, more eccentric, characters that attend. They call them idiots. 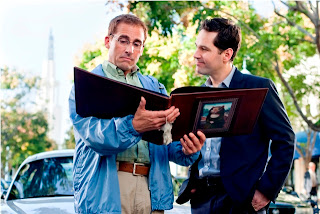 Dinner for Schmucks is a mediocre comedy that is a collaboration of humor and senselessness. The film maintains a brief flirtation with being hilarious but it also teeters on being repugnantly simple-minded. It possesses no middle ground in between the two. This comedy within this film will either have you laughing or extremely irritated. This confusing debacle has some abrupt flashes of comedic genius. However, for every good comedic instance within it, it also contains too many dead spots to allow the audience to enjoy the very amusing moments. This movie has some of the more “cricket spurring” comedic occurrences that you will ever witness within a film. The flashes of humor are enjoyable but many of them are used to the extreme. Quickly draining the humor of the moment where it kills the pleasantry of the joke. Some of the more physical, slapstick moments are the best in the film. The scene where Darla comes to visit Tim after Barry mistakenly invites her over via email, the initial brunch that where Tim meets Mueller and Barry brings Darla (Punch) Others such as Barry’s obsession with mice and Kieran (Clement) running around in a goat costume are severely despicable. 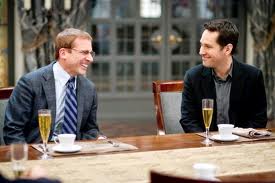 Deeply embedded within this complicated farce is a warm message about truth, love, and friendship. The movie is a great showcase of true friendship and remaining true to oneself. Tim unwittingly learns this though his coincidental meeting that turns into an unsuspecting friendship with Barry. Though his friendship with Barry, Tim begins to recognize aspects about himself as well as other shortcomings within his life. Through the course of the comical change of events, Tim realizes that Barry is a good person and true friend.

Paul Rudd and Steve Carell make a good comedic tandem. The two play of one another well within this muddled subterfuge of misfortune. Rudd plays Tim, an aspiring executive who is stuck in an existence of unfulfilled opportunities. Rudd as the straight man is an accustomed role that he depicts very well. Rudd’s straightforward portrayal opens the door for a zany over the top performance by Steve Carell. Carell gives a great performance as the dim witted, completely misunderstood but lovable, Barry. Barry’s wonderfully misguided comical bouts with stupidity drive the story and the bond that is formed between he and Tim. The misguided attempts by Barry garner much of the laughs within this duality. 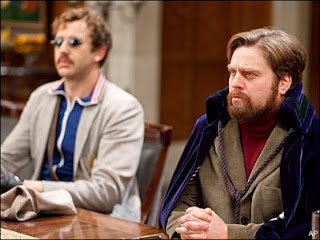 This dim witted story is a great showcase for some of the most ridiculous characters that you will ever see in a movie. Most of them are just vehicles to advance the story. In addition to Carell’s wonderfully idiotic interpretation of Barry, the movie is filled with a number odd mildy humorous characters. These characters led by Carell’s Barry are just like the rest of the film. Some are extremely funny but others are widely irritating. These characters enhance but also detract from the comic decadance of the film. Darla, Tim’s obsessive stalker, Kieran (Clement), the strange and obsessively horny artist, and Therman (Galfinikas), the mind controlling tax employee all do their part to bring this humorous debauchery to life. 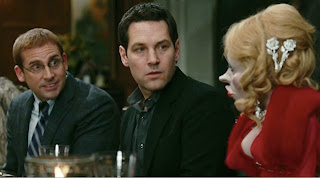 The highlight of this humorous spoof is the final dinner where all of the “so called” idiots are revealed. The comedy surrounding the dinner follows the same mandate as the rest of this mismanaged farce, it’s hit or miss. Some of it is sheer funny but as with the rest of the film’s comedy, it quickly turns it into something deplorable, almost tortuous, completing ruining the humor that it had just inspired only minutes before. The “idiots” come out in all shapes and forms. Some of the them are mildly amusing such as the Blind Swordsman and Barry. While others such as the Pet Psychic and Thurman are ready made targets for gun practice. Barry and Thurman’s finale showdown was one of the most senseless, irritating, utterly deplorable attempts to entertain you. The only thing funny about was the sheer idiotic nature of it.

I’ve never seen a movie like Dinner for Schmucks. The film is as funny as it is irritating. I am completely torn as to whether or not to recommend this film to anyone. Some of it is funny as ever but much of it needs to be burned. If you are a Steve Carell fan then you should check this out but if you’re just a casual fan of film then watch this with caution and only if you don’t have anything else that you would like to see first.
Posted by Da'Mon at 6:33 AM