Battle for Tierra: "A Heartfelt, Fresh Perspective to the Alien Invasion Story that Showcases the Best Characteristics of Humanity" 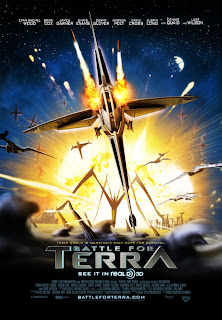 Battle for Terra is an animated sci fi adventure that uses a unique perspective on the typical alien invasion story. This particular tale does a 180 degree turn on the take and makes the humans the invaders of another planet, Terra. This viewpoint added a fresh touch to the usual redundant alien invasion story. 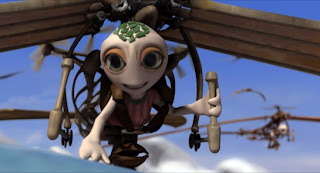 This entertaining animated feature premiered in 2007 and is loaded with voice talents by a number of Hollywood stars as well as a good story. Battle for Terra is stockpiled with a multitude of themes that define the nature of man. The movie aptly emphasizes the violent nature of mankind as this animated feature emphasizes how man’s continually destructive nature has now brought the human spices to the point of extinction. Our destructive ways have completely destroyed the earth, Mars, and Venus. As a result, humans have been forced to live in an “Ark” in are looking for another suitable home. The film takes place generations after that catastrophic event as the Ark is now breaking down.

The film is visually appealing as the colors and richness of the animation are clearly a part of the showcase. The film’s visuals accentuate the story as it is used to help immerse the audience into the culture and environment of this would be home to the potential conquerors, the humans. It also gives a glimpse at the Terrans, a spiritual alien race that float. Most of the characters are not up to the great standard that is now present in most animated features as the humans appear a little odd. This however adds to the sentiment that they are the strangers as compared to the Terrans, who are much more detailed and defined. The colors of Terra and the backgrounds of the planet’s surroundings are magnificently brought to life. 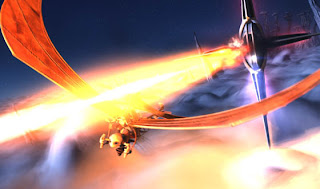 The film speaks volumes about the nature of mankind. It uses the destruction of Earth to illustrate how destructive we can be. In the same breath however, it uses the Terrans to show what could have been the exact opposite of what mankind has become as the Terrans almost destroyed their planet in there indulgence with violence and conquest. The Terrans are a species that were much like man at one point, vicious and war torn but have given that up in order to offset a dismal fate. 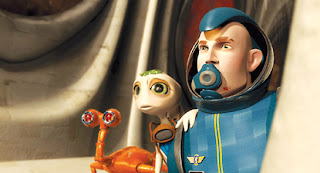 The film focuses on the relationship between a rebellious Terrean, Mala (Wood) and a stranded pilot, Jim Stanton (Wilson) who forge a friendship out of an unlikely chance meeting between the two. This is very reminiscent of Enemy Mine but not to that degree.

I enjoyed Battle for Terra. This film turned out to be so much more than I expected. The trailers make it appear to be some animated Star Wars like movie but the movie is so much more than that. The film is a great showcase for thematic expression. This animated feature cleverly disguises a number of themes. The overriding is the one of man’s indulgence with violence and conquest. However, in addition to those, the film masks messages about discrimination, love, sacrifice, friendship, and religion just to name a few. It is a astutely written, well thought story that does more than just entertain. It spurs one to think, feel, and react to this touching tale of friendship and sacrifice. It isn’t the greatest animated film but it is one of the deepest. A good watch with or without the kids.
Posted by Da'Mon at 6:40 AM