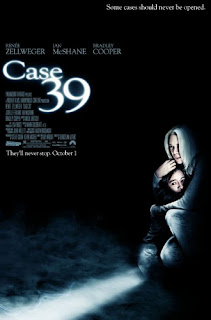 Case 39 is a fresh, enjoyable, welcome change to grotesque horror films of modern day movie making. First and foremost, this movie is actually scary. The movie is very reminiscent of classic horror films like The Omen and Rosemary’s Baby. It pays homage to those archetypes, while adding some level of originality to the existing mold. The movie uses a good plot, slowly focusing on subtle nuances that gradually builds a level of fear. This allows for the story and the details of the it to frighten you as opposed to trying to disembowel your last meal by visually revolting the audience to the point of repulsion. 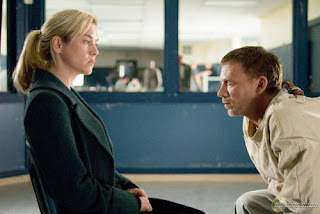 Case 39 is chocked full of deception. The opening moments of the movie is a remarkable set up. It meticulously develops a good quality suspense story from the outset. The plot is extremely well written as Lillith (Ferland), is introduced as the victim, when she appears to be the victim of these two seemingly cruel, neurotic parents. The movie terrifically executes this, effectively causing the viewer to empathize with her before making a 180 degree turn.

The film uses a lot of subtlety as it builds the story to set you up for the tension and anxiety that it inspires. The film constantly raises the suspense, building the anticipation of the chills through the story. It does an excellent job of misdirection as it prays on your sympathies then it slowly begins to release little details about the story that gradually alter our perception of the story we have been deceived by. Step by step, the movie and the characters become something entirely different. The story is so engaging and scary that as the details of the story begin to unravel, the audience is completely submerged in disbelief. Never believing that this could be her true nature. 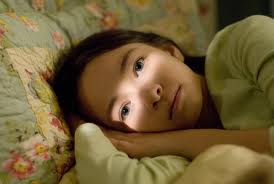 The film is comprised of a number of fine performances that is headlined by young Jodelle Ferland. Ferland’s scene stealing depiction of possessed Lillith is the backbone of the film. Her stand alone performance is what makes the movie work. Ferland command of the screen was a delectable treat to watch as her acting abilities at such a young age is extremely impressive. Ferland’s aptitude to manipulate the screen was beyond extraordinary, almost eerie. She carries the film with her innocence and then her almost instantaneous transformations. Ferland’s ability to seduce the audience with the innocent appeal and her sweet voice while hiding the darkness within was beyond remarkable. One of the best scenes in the film is the scene between Ferland and Bradley Cooper. Doug (Cooper) tries to psycho analyze Lillith but she masterfully shifts the power in the conversation. Manipulating, almost bullying Doug into a corner by a pure use of words. Witnessing the sheer transformation from a timid child to the calculating, devious, menacing personality was so good that it was truly sinister. It was one of the best in a movie in some time. Renee Zellwegger as the crusading, good hearted social worker does as admirable job as our protagonist turned victim. She was perfect as the would be victim. Bradley Cooper, Ian Mcshane, and Callum Keith Rennie all add commendable supporting roles.

Case 39 is a sound horror movie. The movie is a decent story filled with a terrific character performance. Young Jodelle Ferland’s depiction of the demonic Lillith is as impressive as any that you’ll see in a horror film. The movie isn’t a true classic but it’s a real treat because it’s a rare occurrence in modern day movie making. Its rarity is what makes the movie even better. Fans of true horror movies will appreciate Case 39 more than the average moviegoer but it is a sensible story that anyone can enjoy.