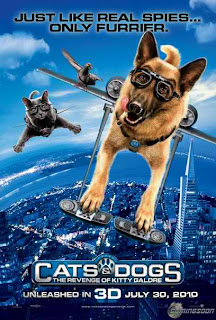 In the age-old battle between cats and dogs, one crazed feline has taken things a paw too far. Kitty Galore, formerly an agent for cat spy organization MEOWS, has gone rogue and hatched a diabolical plan to not only bring her canine enemies to heel, but take down her former kitty comrades and make the world her scratching post. Faced with this unprecedented threat, cats and dogs will be forced to join forces for the first time in history in an unlikely alliance to save themselves -- and their humans. (Imdb.com) 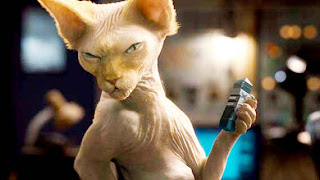 The film is a humorous spoof that uses the ancient conflict between cats and dogs as a foundation for the film. The movie uses the spy genre, turning the cats and the dogs into spies, as they battle one another to protect the humans. It humorously incorporates multiple references to classic films such as The Silence of the Lambs, Men In Black, The James Bond series of films, and Batman to name a few.

Cats and Dogs 2: The Revenge of Kitty Galore cleverly intertwines many of the antiquated phases that apply to the longstanding interaction between dog and cats. This is done through both visual displays as well as being incorporated verbally. The witty comedic wordplay between the characters embrace the dispute, in addition, it enhances the feel of the movie. It makes the personification of the animals feel more realistic, as well as very humorous. 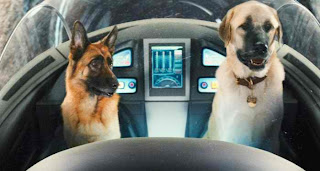 The movie is highlighted by an all star voice cast. Nearly every character in the film is voiced by a marquee Hollywood name. The film is highlighted by the ongoing jokes of Kat Williams character Seamus and by Mr. Tinkles (Hayes) who makes a return from the first film. He has some scene stealing appearances that are very comical. Mr. Tinkles is now imprisoned for his crimes against mankind and canine after the first movie. This film uses the Silence of the Lambs as a theme for the imprisonment of the former arch nemesis of the dogs.

Overall, Cats and Dogs: The Revenge of Kitty Galore is a really good family film. The parodies involving the different movies will increase the level of enjoyment for adults but the kids will most certainly enjoy it. Some of it is borderline ridiculous but hey, it’s a kids movie. The children will definitely get a kick out of it and adults can find some level of enjoyment as well.
Posted by Da'Mon at 6:30 AM