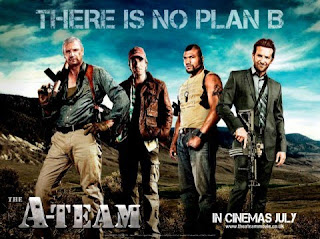 ﻿
Rating:
****
By Da’Mon Guy
The Hollywood excavation of the 80’s finally bears some fruition. The re-imagining of The A-Team is a superb, action packed, updating of the classic television show that was created by Stephen A. Cannel & Frank Lupo. The motion picture version unites Liam Neeson (Taken), Bradley Cooper (The Hangover), Sharto Cooper (District 9), and Quinton “Rampage” Jackson (Never Surrender) as they attempt to bring the iconic television characters to the silver screen. The film also features Jessica Biel (Valentine‘s Day), with appearances by Brian Bloom (Smokin‘ Aces), Patrick Wilson (Watchmen), and Gerald McRainey (Get Low).
The motion picture debut of the A-Team is a terrific intermingling of action and comedy. It aptly displays all of the elements that made the television show popular. The movie has the same light hearted comedic aspects just as the television did, which enhances the camaraderie between the quartet of stars. The film’s creators did their homework as the film has the look and the feel of the television show. 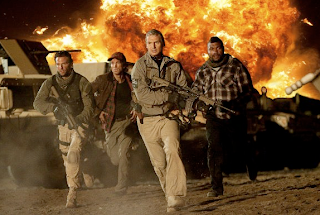 The plot of the film is a compliment to the television series as well. The movie duly sheds some light on the origin of team Alpha or A-Team. It successfully incorporates intricate nuances that made the television show popular as well as giving some keen insight into the some of the show’s unanswered questions such as B.A’ fear of flying and why the A-Team was on the run in the first place. The film even manages to squeeze in an appearance by the television show‘s long time pursuer of the A-Team, Col. Dekker.
There are only a couple of hindrances to the movie version of The A-Team. While the film does give some insight into the origin of the team, it does a poor job at giving a satisfactory origin for all of the members. The movie opens with Hannibal (Neeson) attempted to rescue “Face” (Cooper). After a planned escape, Hannibal randomly meets B.A. (Jackson) in the middle of the desert as he attempts to steal his van. After a quick conversation where the two share tattoo stories, B.A. is on for the long haul. This was clearly a load of crap as the writers could’ve have found a better way to introduce the characters to one another. Especially when in the television series, B.A. and Hannibal were more often on the same page as opposed to the rest of the team. In addition, the movie’s conclusion wasn’t the typical A-Team finale. Hannibal didn’t have the master plan at work and we didn’t have the usual B.A. ingenious mechanical creation to aid in the completion of the mission. Conversely, the film did try to incorporate this within the course of the film. 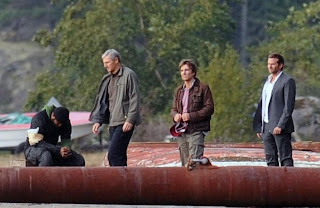 The big screen adaptation of The A Team works because of its casting. Each member of the new casts aptly compliments their predecessors. All of the members of the new version pay homage and exceeds what the prior cast began. While each member may not be as iconic, they certainly make the characters their own. 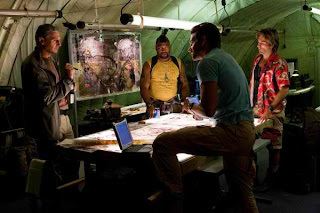 Liam Neeson, Bradley Cooper, Quinton “Rampage” Jackson, and Sharlto Cooper are terrifically casts as the fugitive heroes. The quartet’s on screen chemistry was nearly as good as the original. Liam Neeson may not have the “swag” that George Peppard had as the calculating Col. Hannibal Smith, but he is convincing as the pre television adventures version of Smith. Bradley Cooper matches and in some ways surpasses Dirk Benedict’s portrayal of the womanizing Lt. Templeton “Face” Peck. Cooper has the look and the charm as he induces his own charisma into the role. “Rampage” Jackson is an effective Cprl. B.A. Baracas. He had the most difficult character to measure up to as Mr. T’s iconic look and performance defined the television show. Jackson attempts to induce some of Mr. T’s iconic verbiage but his attempts are some futile. Jackson’s mismanaged attempt is not as entertaining nor does he possess the pizzazz but he is acceptable. Sharlto Cooper’s over the top recreation of the seemingly neurotic Capt. H. M. “Howling Mad” Murdock was easily the best of the four recreations. Copper’s scene stealing comedic nature was one of the best aspects of the movie. Cooper easily outshined the rest of his cast mates. Jackson and Cooper was able to recreate the chemistry demonstrated by Mr. T and Dwight Schultz as Murdock and B. A’s rivalry was renewed. The rivalry was one of the key elements that helped to define the original show. Jackson and Cooper revoke nostalgia as they nail the antagonistic, sarcasm laced bond between B.A. and Murdock.
I really enjoyed the big screen version of The A-Team. As a fan of the show I was a little leery of a movie version because of my affinity for the original cast and television show. This is one of the few of today’s “re-imaginings” that is actually as good as the original. The big screen feature of The A-Team put my fears to rest as the film is very good. Nearly every member of the new cast is as entertaining as the original. The story of the film also does the television show justice as it perfectly fits into the cannon of the show. The movie is universally appealing as fans of the TV show will enjoy as well as being appealing to those who have never didn’t follow the show.
Posted by Da'Mon at 6:32 AM