Ultimate Avengers:A Creative Reimagining of the Orgin of The Avengers 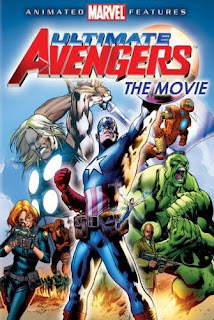 Rating:
****
By: Da'Mon Guy
Ultimate Avengers: The Movie is an innovative, action-packed full-length animated feature that showcases an alternative perspective of the story of the formation of Marvel Comics super team of heroes, The Avengers. The film features many of the characters that will be showcased in the upcoming live-action movie, The Avengers. The movie features the voice talents of Justin Gross, Grey Delisle (G.I. Joe: Resolute), Michael Masse (The Resident), Olivia D’Abo (Green Lantern: First Flight), Marc Worden (The Invincible Iron Man), Nan McNamara (Criminal Minds: TV show), Nolan North (Justice League: Crisis on Two Earths), Andre Ware (Hotel For Dogs), David Boat (Super Hero Squad: TV show), Fred Tatascoire (Tangled), and Jim Ward (Toy Story 3).
Ultimate Avengers is a inventive, highly enjoyable animated film that was released in 2006. It’s a full length animated feature based on the Marvel comics mini-series called the Ultimates that premiered in 2002. It is by far one of the best animated films to be released by Marvel Animation Studios. The film and comic gives an alternate modern perspective on the creation of Marvel’s long standing super team, The Avengers.
Continue reading on Examiner.com DVD review: Ultimate Avengers (2006): A reimagining of Marvel's super team - Baltimore Animation | Examiner.com http://www.examiner.com/animation-in-baltimore/dvd-review-ultimate-avengers-2006-review#ixzz1VqkPdunm
﻿
Posted by Da'Mon at 7:19 AM