G.I. Joe: Resolute: The Best take on the G.I.Joe Universe 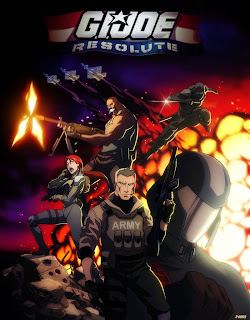 Rating:
*****
By: Da'Mon Guy
﻿
G.I. Joe: Resolute is an extremely enjoyable, action packed adaptation of the classic characters from the highly adored toys by Hasbro. This is the best incarnation of the highly revered characters of the 1980’s, even better than the beloved television series of the 1980’s. The film features the voice talents of Steve Blum (Transformers: Prime), Charles Adler (Transformers: Revenge of the Fallen), Eric Bauza (Scooby Doo: Mystery Incorporated), and Grey Delisle (Batman: The Brave and the Bold).

G.I. Joe: Resolute is an entertaining, alternative perception of the popular characters of the 1980’s cartoon series. G.I. Joe: Resolute is a collection of anime shorts that were melded together into a full length feature that was released in 2009. It offers an unmatched level of realism that has never been utilized with the use of the occupants of the G.I. Joe universe. The film epitomizes and captures the true essence of what the cartoon and comic books were all about. It captures the true essence of the characters.