Abduction: This Movie Needs to Turn Up Missing 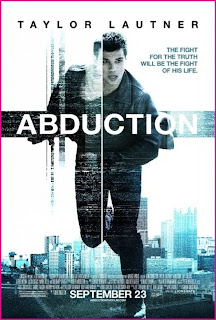 Rating:
*1/2
By: Da'Mon Guy
﻿
The incredible success of Twilight has been one of the worse things that happened to film recently. Because of the wide-spread, devout following that the franchise has created, it has sparked Hollywood to produce a number of bad films that try to steal some of its thunder. These films have either been modeled after Twilight or try to use some of the stars of the film to lure the fans to other films. Abduction falls prey to the latter. Abduction is a nauseating, sappy absurdity that uses some teenage eye candy as subterfuge to lure young movie lovers to this mind-numbing teenage drama. Its a chance to squeeze a few more dollars out of young movie goers with this bad attempt at an action film. The film stars Taylor Lautner (Twilight: Breaking Dawn), Lily Collins (Priest), Alfred Molina (The Sorcerer's Apprentice), Maria Bello (Grown Ups), and Sigourney Weaver (Paul). It’s directed by John Singleton.


Abduction is an underachieving, coming of age teen-focused depravity that is more melodrama than it is an action film. The film preys on the desires of the fans of the Twilight saga as this film is strictly a chance to get a quick buck by using teen eye candy, Taylor Lautner.


Continue reading on Examiner.com DVD review: Abduction: This movie needs to turn up missing - Baltimore Movies | Examiner.com http://www.examiner.com/movies-in-baltimore/dvd-review-abduction-this-movie-needs-to-turn-up-missing-review#ixzz1n7JQPsSO
Posted by Da'Mon at 8:30 AM