Vanishing on 7th Street: "A Deplorable, Perplexing Calamity that Frustrates & Needs to Vanish" 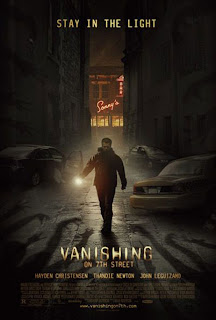 ﻿
Rating:
**
By: Da’Mon Guy
Vanishing on 7th Street is a dismal, befuddling calamity that becomes increasingly more frustrating the longer you watch it. This tragic raping of your time unsuccessfully attempts to masks itself as a horror film. The proprietors of this baffling debacle are Hayden Christensen (Takers), Thandie Newton (2012), John Leguzamo (Gamer), and Jacob Latimore.

When a massive power outage plunges the city of Detroit into total darkness, a disparate group of individuals find themselves alone. The entire city's population has vanished into thin air, leaving behind heaps of empty clothing, abandoned cars and lengthening shadows. Soon the daylight begins to disappear completely, and as the survivors gather in an abandoned tavern, they realize the darkness is out to get them, and only their rapidly diminishing light sources can keep them safe. (Imdb.com) 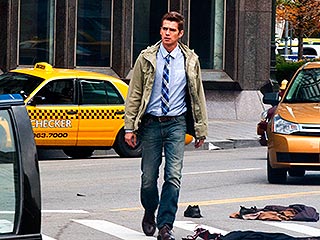 There are a number of shortcomings of this perplexing tale of suspense, however, the biggest problem with Vanishing on 7th Street is the film offers no clear reason why anything in this appalling travesty occurs, other than that it does. It begins with a power outage. Everything goes dark and when the lights come back on, nearly everyone has vanished, leaving only their clothes in their place. This event is worldwide, causing nearly everyone to disappear. The film never gives any valid justification for the occurrence. After the initial disappearance, some “demon like” spirits in the dark are shown to be responsible and if you don’t have a source of light then you vanish. The story is quickly progressed 72 hours where the four central characters are suddenly thrown together. Everything in the film just happens. People vanish, the darkness begins to consume everything even making the days shorter, the power drain even extends to things that power light sources like batteries, and the list goes on. The darkness that is consuming everything is filled with shadows and voices. The “darkness” or “shadows” supposedly has some since of intelligence as it can produce light and confuse the would be victims so that you leave your light, enabling it to envelope you. This film is just a ambiguous wreck that doesn’t garner the time it takes to watch it not the energy you waste trying to figure it out. 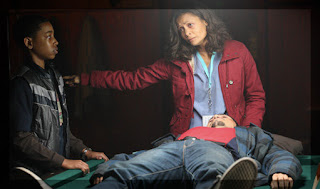 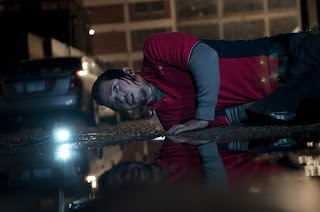 The film’s inadequacies are not because of the actors efforts. Hayden Christensen, Thadie Newton, John Leguzamo, and Jacob Latimore all do their best to breathe some life into this perplexing misfortune but it’s the shortcomings of the script and not their performances that make this a deplorable, frustrating travesty. The characters motivated by searching for a loved one which adds to the ease of the deception of the attempts made by the "shadows" to persuade them to come out of the light. 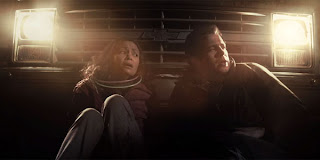 Vanishing on 7th Street has one lone redeeming quality. This mind numbing farce does a good job to establish a state of suspense but it’s mishandling of the story does nothing to use the level of anticipation and tension that it stirs. The opening of the film does a decent effort in raising the amount of tension. It creates an effective level of suspense but quickly hurries through the details of the story to what is supposed some scene where it tries to induce a level of horror. The scenes never work because the level of confusion that it has caused is too great to allow your mind to be scared. Some of the more suspenseful scenes were effective but the lack of clarity with the story causes them to lose entertainment value.

Vanishing on 7th Street is easily one of the most unfulfilling films of 2011. This absurdity is a confusing, pointless charade that is too ambiguous then completely misuses the actors. This is a perplexing tale of suspense with no satisfaction and very little redeeming qualities that warrant its viewing and production. The film's climax was even more perplexing and absurd than the anti-climatic ending. No aspect of this movie offers the viewer any satisfaction. The film is supposed to be a horror/suspense film but it does very little to scare the audience. The only thing scary about this tragedy is the fact that it lasts as long as it did.
Posted by Da'Mon at 6:44 AM