Legends of the Guardians: The Owls of Ga'Hoole: An Enjoyable, Theme Driven Visual Marvel for All Ages" 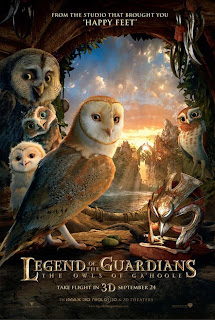 ﻿Rating
****
By: Da’Mon Guy
Legend of the Guardians: The Owls of Ga’Hoole is an delightful, theme driven showcase that implements some impressive visual imagery to effectively breathe life into a narrative that first appeared in the form of a best selling series of children’s books. The film is a theme driven, enjoyable personification of owls. The movie is a great collaborative effort of Hollywood talent that unite to give the owls life. It features the likes of Jim Sturgess (21), Sam Neil (Daybreakers), Helen Mirren (RED), Geoffrey Rush (Pirates of the Caribbean Trilogy), Hugo Weaving (The Matrix Trilogy), Anthony Laplagia (All Star Superman), Richard Boxborough (Sanctum), Emily Barclay (Love Birds), Ryan Kwaten (Dead Silence), and Miriam Maragoyles (Happy Feet). The movie is directed by Zach Snyder (300, Watchmen, & Sucker Punch).

Legends of the Guardians: The Owls of Ga’Hoole is a touching, universally appealing story that is commingled with great visuals that transform this into an enjoyable theme driven showcase. The movie is based upon the series of children’s books written by Kathryn Lansky. This mythological story centers on dreamer Soren (Jim Sturgess), a young owl enamored with stories of "The Guardians", a clan of warrior owls who hail from the Tree of Ga'Hoole, and protect the weak from an evil army called the Pure Ones. When Soren and his brother, Kludd (Ryan Kwanten), are kidnapped by these Pure Ones, the stories become reality. Soren escapes and hunts for the Guardians to save the owl kingdom from the Pure Ones, while Kludd slowly becomes one. (Imdb.com) Legends of the Guardians is an exceptional film as it is embedded with a number of themes that is the driving force of this visual marvel. Not only does it intertwine the overriding ideal of right and wrong but this film speaks volumes about family, courage, prejudice, friendship, loyalty and more than anything the belief in one’s self and an ideal. 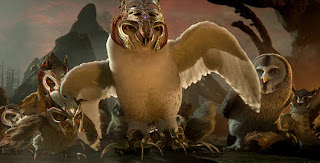 The movie embraces the ideal of the belief in an ideal that is larger than one’s self. It also encourages one to follow your dreams. The movie’s visuals wow you from the outset but as the story unfolds the thematic nature of the tale slowly begins to grab hold of you. Each ideal is intricately embedded within the seemingly light hearted nature of the movie. First, the importance of family, then the ideal of standing of for those who cannot fight for themselves, then friendship and so on. The movie cleverly places them in plain sight but uses an entertaining facade to present these messages.

Legends of the Guardians: The Owls of Ga’Hoole isn’t your usual kid friendly story. The film has a seriousness to that is very appealing. Unlike many of the other animated kids features that attempt to appeal to adults, Legends of the Guardians doesn’t evoke humor to keep the adults engaged. This particular kids story has a more serious tone, almost resembling a drama. It is has a very serious tone as it handles the subject matter. The movie is terrifically enjoyable as it interweaves the powerful themes that it has embedded within this tale of fantasy.

This a wonderfully enjoyable film for kids and adults alike. The visuals imagery of the film is the first thing to grab a hold of you, however, it isn’t the best aspect of the movie. The movie is a magnificent showcase for what a fairy tale truly is or was at one point. This is a journey into fantasy that children of all ages can enjoy. The movie moves a at a terrific pace to keep the kids occupied and the story is engaging enough to entertain adults. A clever flight of the imagination that all should bear witness to.