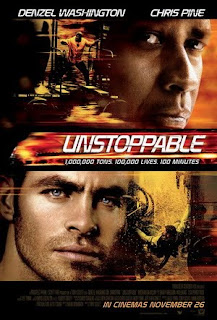 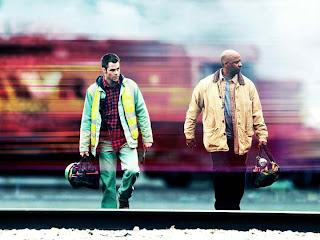 Unstoppable is an engaging, thrilling story of the courage of two ordinary men that risk their lives in order to save the town of Stanton, PA. The movie is inspired by true events. The film maintains a great pace. The story begins slowly by  introducing the audience to the characters and then it induces the circumstances of the situation very intricately. The film then aptly builds the tension of the circumstances surrounding the events of the runaway train. With each passing moment, the details are slowly introduced to the audience, swallowing your attention into the nature of the event. The story is so captivating and enthralling that you will not be able to look away as you bear witness to the heroism of the unlikely pair of everyday heroes.

The film establishes a great level of tension within the movie. With each passing moment, the movie transforms this simple everyday form of transportation, into a angry beast of the heartless destruction and devastation. Every scene of the train’s progression toward Stanton raises the level of tension in anticipation of the next calamity that it causes. Your attention is transfixed to the screen as Train 777 races down the tracks like an angry beast of fury invoking a path of carnage and devastation in its wake.

The movie is features a number of outstanding performances headlined by Denzel Washington. Washington plays Frank, a 28 yr railroad veteran, who is being forced to retire in order to pave the way for younger, more cost effective labor. Washington is at his charismatic best as you feel the passion of his performance in each line of his dialogue. Chris Pine matches Washingtons passionate portrayal line for line as he plays Will Colson, a young union conductor with a number of personal problems. The pair have terrific chemistry together as they portray the rivals that soon become heroes. Rosario Dawson, Kevin Dunn, and Lew Temple each turn in excellent performances as this story of determination and grit unfolds. Lew Temple, in particular, delivers a scene stealing cameo as the cowboy like welder, Ned Oldham.

Unstoppable is an amazing, feel good story of heroism that will have you glued to the screen throughout the length of it. The action is deliberate and well paced. All of the characters are well portrayed. Denzel Washington delivers one his best performance since Man on Fire. The movie is an enjoyable, captiving view that will make you want to cheer by its end. .
Posted by Da'Mon at 6:42 AM