Unknown: "An Engaging Tale of Subterfuge" 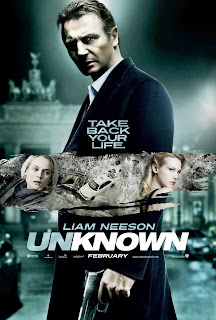 ﻿
Rating:
****
By: Da’Mon Guy
Unknown is an entertaining, intriguing tale of subterfuge that eloquently blurs the details of the story in order to keep the audience in suspense until its climax. The movie stars Liam Neeson (The A-Team), Diane Kruger (Inglorious Bastards), January Jones (We Are Marshall), Frank Langella (The Box), and Bruno Ganz (The Reader).


After awaking from a coma after a near death accident, a man discovers that someone has stolen his identity. In a furious attempt to regain his life he soon discovers that everything is not what it appears to be.

Unknown is an entertaining, engaging tale of deception in the mold of the Bourne Identity that will keep you guessing up to the final minute. The story features an impressive twist of events that submerges the audience into the deception of the story. The events of the story are delicately revealed in order to maintain a veil of suspense so that the audience is keep in suspense for the majority of the film. The film gives you clues to help solve the dilemma through out as it immerses its audience into the mystery. This was an excellent plot element that gives the movie an almost interactive feel. 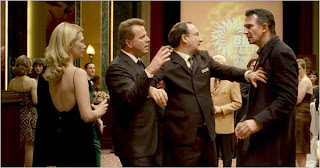 The director of Unknown, Juame Collet-Serra, makes some great choices to create this story of trickery. The use of the camera is one of them. The camera is used exquisitely to highlight the story. Early in the film as Martin comes out of his coma, many of the scenes begin blurry and are out of focus. This immerses the audience in the story and accentuates the feeling of disorientation that Martin feels as a result of his coma. The second is the subtle implementation of flashbacks that are used throughout the film. The flashbacks gives the audience clues as to the Harris’s history but they are also pieces of the puzzle that help with the interactive feel of the film. The action of the story is enjoyable as well. The car chase scene was one of the better ones in some time. Liam Neeson adds an admirable performance as Martin Harris. His depiction of the amnesiac Harris carries the film. Neeson’s portrayal is both believable and entertaining. 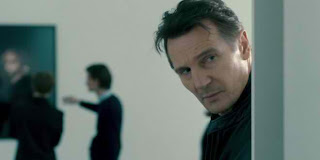 There are only a couple of detractors to this entertaining suspense tale. First is the pace. Some points of it move very slow, almost tediously as it tries to maintain the veil of suspense that it intricately builds. In attempting to maintain the deception that it creates, the middle of the movie seems to drag. The second major detractor is the completely unfair comparisons that it draws to “Taken” and the “Bourne Trilogy.” Unknown is neither of the two, it is more suspense than either of them. It does contain elements of both that are filtered into it. It does have the search for an identity and the spy feel like the Bourne trilogy but the comparisons to those movies end there. The film has considerably less action than any of the Bourne films as this is geared more towards the suspense than any of the three Bourne films. It contains even less of a similarity to “Taken” as the only comparisons to that film is the fact that Liam Neeson is in it and that it takes place oversees. Unknown is a tale of suspense and deception. The film is more of a spy mystery with elements of action filtered in. Both of those films are more action oriented. 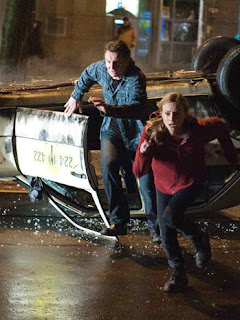 Unknown is a good film. The film is a first rate tale of suspense that is interwoven with action to bring an enjoyable spy thriller. The film creates a good whodunit that contains a surprise twist that increases the entertainment value of it. Unknown makes for a good way to spend your hard earned money. Go see it and enjoy
Posted by Da'Mon at 6:55 AM