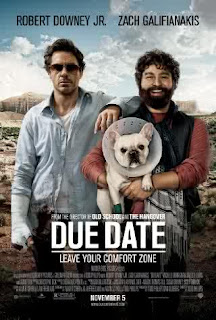 Rating:
***
By: Da’Mon Guy
Due Date is a moderately entertaining, outrageous comedic undertaking which has no regard as to what it will do to garner a laugh. This comedic debacle tiptoes the fine line of being an extremely humorous comic collaboration and being an utterly irritating absurdity. This humorous balancing act is comprised of an all star cast such as Robert Downey, Jr. (Iron Man 2), Zach Galfinikas (The Hangover), Michelle Monahagan (Eagle Eye), Jamie Foxx (Law Abiding Citizen), Juliette Lewis (Conviction), The RZA (Repo Men), and Danny McBride (Pineapple Express).

Peter Highman (Downey, Jr.) is an expectant father on his way to meet his wife who is close to delivery. By a chance encounter, he meets Ethan Tremblay (Galfinikas), an aspiring actor who causes him to be placed on a no fly list. Peter desperately trying to get home decides to go with Ethan on a road trip where an outrageous chain of events occur. 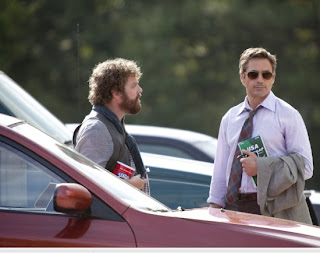 Due Date is a mildly entertaining collaboration of comedic decadence. It is an over the top, slapstick buddy comedy movie that follows the same concept as some of the great buddy comedies like Planes, Trains, and Automobiles, Midnight Run, and Dumb and Dumber. This film has an extremely, outrageous nature that only gets more ridiculous as the film progresses. Most of the comedy in it is hit or miss, with no midpoint. You’ll laugh or be completely irritated. Due Date has no limit as to what it will do try to reap the benefit of a laugh. The film has no boundaries as to what it will use or poke fun at in order to stir some level of emotional response from the audience. 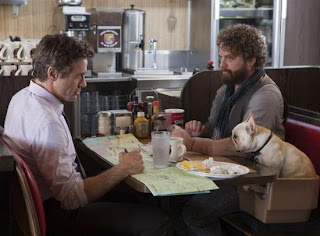 Much of the comedy of Due Date will appeal to teenagers as the name dropping (mentioning Craigslist, You Tube, and Facebook) and slapstick nature will reap plenty of applause from that age group. But for every good well timed humorous scene there is an equally mismanaged humorless one to match. 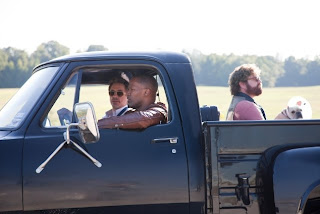 The comedy of Due Date is more about the circumstances as opposed to the characters that the actors are portraying. The film contains a pair of the most mismatched characters ever thrown together. This extremely awkward pairing only adds to the ridiculous nature of the film. Neither of the characters are particularly likeable. Peter Highman (Downey, Jr.) is an angry, violent rage of a volcano that even when he is being helped across country to see his wife, he finds it hard to be nice. This is a man who will punch a child, spit in a dog's face and leave a man broke at a rest room while stealing his car. To be honest, his character simply isn't very likable, and is sometimes just downright mean, his demeanor is just too "dark" and his personality too brooding and cranky to play the part of a good family man trying at all costs to get home in time for his child's birth. Zach Galfinikas quickly assumes the role that has become his calling card. He dons his now all too familiar role of being the disgustingly irritating guy that no one would befriend, Ethan Trembley (Galfinikas). This guy is just too ridiculously outrageous to be enjoyable. The guy is so irritating and over the top that you just can't take him seriously. He is just mean and he is such a slob that you have no empathy for him. The sentimental moments in the film lose their impact because of the irritating nature of both characters. 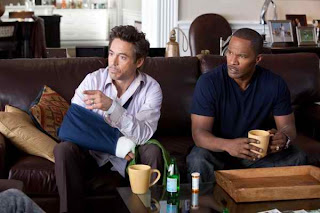 However implausible, Robert Downey and Zach Galfinikas make a good comedy tandem. Downey, Jr as the straight man and Galfiniakas as the comic relief are mildly enjoyable. The two have really good on screen chemistry. Jamie Foxx and Danny McBride make enjoyable cameos. 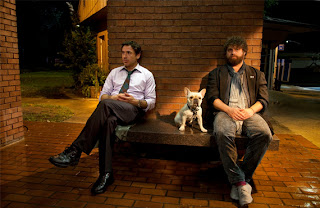