Battle: Los Angles: "An Entertaining, Sci-Fi Themed Testament of Courage and Determination that is Firmly Grounded in Reality" 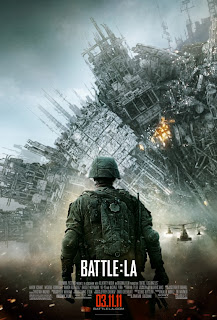 Rating:
***½
By: Da’Mon Guy
Battle: Los Angeles is an action packed, sci fi themed story of heroism and courage. The movie exquisitely intermingles the sci fi premise of the film with a humanizing perspective in an attempt to bring a fresh approach to one of the current movie trends in Hollywood. The film stars Aaron Eckhart (The Dark Knight), Ramon Rodriguez (Transformers 2), Michelle Rodriguez (The Fast and the Furious), Neyo (Stomp the Yard), Cory Hardrict (He‘s Just Not That Into You), Bridget Moynahan (I, Robot), Noel Fisher (Final Destination 2), and Michael Pena (The Lincoln Lawyer).


After an alien invasion, a group of Marines attempt to rescue some civilians and fight back the invaders. 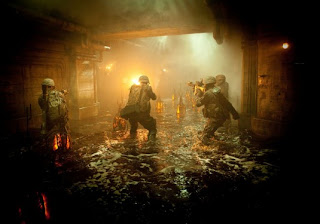 Battle: Los Angeles is an action themed sci fi movie that offers a new point of view to the oft used sci fi alien invasion story. This latest usage of the premise utilizes the viewpoint of a group of Marines to add a reinvigorating take on one of Hollywood‘s current trends. The movie feels like a cross between Cloverfield and Black Hawk Down. 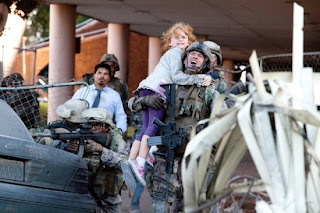 The film unfolds through the eyes of our Marines. This adds a humanizing element to the film. Utilizing this perspective, it enables the audience to become more personal with each of the characters. We feel their loss and sacrifice with every passing moment. The movie also creates a good quality level of tension and anticipation. As the Marines make their way through the decimated streets of Los Angeles, you never know where the next attack may come from. The movie’s action comes right at you, almost like a first person video game. It’s very enthralling, it envelopes you, causing the audience to feel like it is a part of the team. 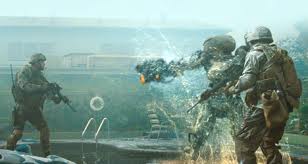 The movie is packed with some great action. The film’s action is first rate. Battle: Los Angeles is firmly rooted in reality. In spite of the sci fi premise, the film has a realistic look and feel to it that is only matched by other military films. The film feels more like the next Black Hawk Down as opposed to Skyline. The film has a level of realism that has not been matched by a film of this nature since Close Encounters of the Third Kind. It takes an ultra realistic approach in the delivery of this compelling tale. The look and delivery of the movie is excellent. Battle: Los Angeles compels you to believe that you are in the midst of an invasion in modern day LA.

There are a couple of aspects that hinder the entertainment value of it. The film’s greatest asset was also its biggest hindrance. Battle: Los Angeles is told from the perspective of our group of Marines. This was a great concept but it slightly mires the film because you never really get a good look at the opposition. Meaning the off world intruders are never really seen. Only brief glimpses or long distance views. 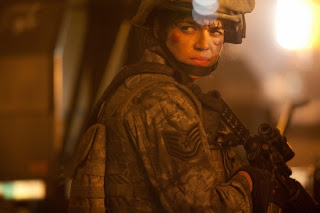 The second detractor of Battle: Los Angles is that the group of Marines is comprised of stereotypical typecast characters. The archetype for each of the Marines has been used over and over again. The aging veteran who decides to quit, the rookie, the soon to be married guy, and so forth. The types have been used in too many military movies. With all of the positives that Battle: Los Angles has going for it, the creators could have used some more creative archietypes to base its characters. 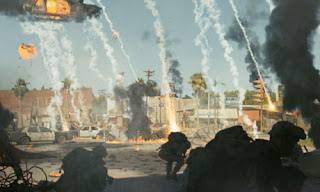 The final detractor of the film is the lack of cohesion that Nootz’s unit has. They are very disorganized as the mission begins. Despite the realistic approach that the film utilizes, the unit seemed very disorganized. They didn’t use much of the “military jargen” that we often bear witness to in a number of military based films. However, the lack of cohesion adds to the realistic nature of the film. New units often don't have the time to gel and Battle:Los Angeles is a great showcase for this. The unit that Nootz is assigned to has little to no field experience together and this is highlited within the film. Nootz’s group’s level of organization as opposed to Arnold’s Schwarzenegger’s team in Predator (1986) almost seems teenage. 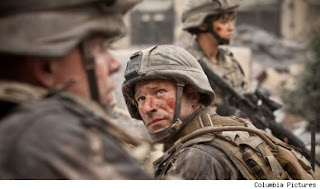 Aaron Eckhart’s performance as Staff Sgt. Nootz carries most of the film. Eckhart’s singular standout portrayal of the troubled but driven Marine is one of the best to date in this type of film. Eckhart’s perfect depiction of Nootz epitomizes everything that Battle: Los Angles is about. Sacrifice, determination, loss, and an unrelenting perseverance. He single handedly propels this film from average to good. The other actors add some level of enjoyment but they never measure up to Eckhart’s outstanding performance.

\     Battle: Los Angeles is a compelling, heroic story then will entertain and inspire. This a terrific testament of the power of the human spirit. The film will satisfy the cost of the ticket. The opening 20 minutes of the movie aside, it never stops. The film maintains a terrific pace that maintains a constant level of interaction with the audience through the building of tension, the use of the action sequences, and the emotionally compelling scenes until the credits. It will keep you engaged throughout. Battle: Los Angeles has a fantastic realistic ending that increases the level of enjoyment as well as the raising the respect and appreciation for Staff Sgt. Nootz and his courageous Marines. Don’t pass this one up as just another one of those sci fi “alien” movies. The film is much more and you should check it out.
Posted by Da'Mon at 6:44 AM