Tru Grit: "An Entertaining Return to the Days of Yesteryear" 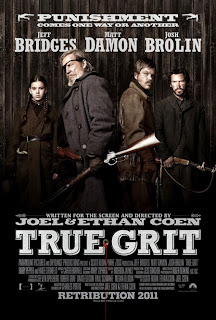 Rating:
****
By: Da’Mon Guy
Tru Grit is an engaging, extremely entertaining, performance driven drama set in the days of yesteryear about redemption, determination and “True Grit.” The film epitomizes the former love affair that prior generations had with the western genre. It is a showcase for an impressive, breakout performance by 14 year old Haliee Seinfield. The movie also stars Jeff Bridges (Tron: Legacy), Matt Damon (The Bourne series of films), Josh Brolin (Wall Street: Money Never Sleeps), and Barry Pepper (Seven Pounds).

After the murder of her father, a determined young girl seeks the aid of a U.S. Marshall to bring her father’s killer to justice. 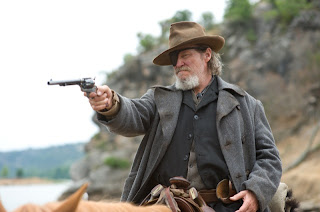 Tru Grit is an exceptional remake of a classic 1969 movie of the same name that featured John Wayne. This latest version characterizes why the western was once the pinnacle of American film making. The movie is an excellent drama that aptly and explicitly compliments the genre. Tru Grit is an incredibly accurate recreation of the days gone by on a multitude of levels. The picture envelopes the audience into the era with the apt usage of broken dialogue as well much of the verbiage in the film are pleasantly used to give the film the richness of the old west. it also displays a brief showing of the prejudice against the American Indians during a hanging scene that adds a great level of realism to the film, instantaneously transporting the audience into the wild west.

The film is a terrific tale of determination, redemption, and retribution. It revolves around the unwavering determination and indomitable perseverance of young Maggie Ross (Steinfeld). As we follow her pursuit of justice for the senseless murder of her father at the hands of Tom Chaney (Brolin). The theme of the film is consistent with most westerns as this story focuses on family, revenge, and good old cowboys. 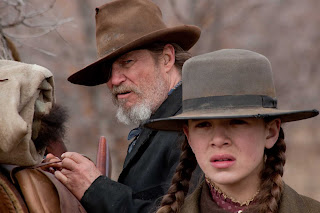 Tru Grit is highlighted by a number of outstanding performances. The are out led by youthful Maggie Ross, who is portrayed exquisitely by fourteen year old Haliee Steinfeld. Steinfeld won an open casting call in which she beat 15,000 other potential young actresses for the role. Steinfeld’s terrific performance is a masterpiece and the best in the film in spite of being cast against some Hollywood’s finest. Her remarkable portrayal is the backbone of the movie. It drives it and epitomizes the title of the film, “Tru Grit.” Steinfeld’s performance isn’t anything short of Oscar worthy. 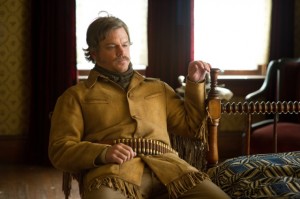 The film also features remarkable performances by the other actors that headline the film. Jeff Bridges, Matt Damon, Josh Brolin, and Barry Pepper each make their mark in the stirring retelling of a classic Hollywood film. The quartet unite their talents and intertwine them magnificently with the performance of Haliee Steinfeld to revisit the time of cowboys and Indians. Bridges was exceptional as the mulish Royster Cogburn. Bridges interpretation of the ornery one eyed U.S. Marshall was an entertaining indulgence to behold as his stubbornness was only exceeded by his drinking. He was the classic cowboy stereotype that helps to define the film as it was a terrific offset to the performance of Steinfeld. You can’t have a western without one. Matt Damon’s depiction of the verquashsis Laboeuf, often called Labeef in the film, was one of Damon’s best. He completes the fine trio of performances to bring this modern oddity to life. Josh Brolin and Barry Pepper also make brief but admirable appearances as the antagonist to our mismatched trio of heroes.

Tru Grit is a high-quality film that whisks you into the wild west. While I have never seen the original, this film offers more than enough to measure up to that picture. The film features a trio of really good performances and a good story that are entertaining enough to satisfy any moviegoer. Fans of the western genre as well as those who aren’t particularly fond of the genre will be exceedingly entertained. The story as well as the breakout performance by Steinfeld makes the movie universally appealing. An enjoyable experience that everyone should see.
Posted by Da'Mon at 9:10 AM