Just Go With It: "An Entertaining, Jocular Approach that Showcases of the Lies People Tell 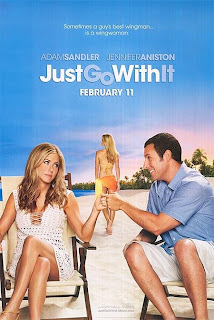 Rating:
****
By: Da’Mon Guy
Just Go With It is an enjoyable, charming comedy that humorously embellishes on the untruths people tell and the lengths that they undertake in order to maintain the deception. The film also incorporates an extremely jocular approach to the world of cosmetic surgery. It whimsically pokes fun at a number of surgeries that people have altered themselves to become more appealing to others. This humorous endeavor stars Adam Sandler (Grown Ups), Jennifer Aniston (The Bounty Hunter), Brooklyn Dekker, Nick Swardson (Grandma’s Boy), Bailee Madison (Brothers), Griffin Gluck, and Nicole Kidman (Australia).


Dr. Danny Macabee has a problem. The girl of his dreams discovers his wedding ring after a chance encounter. Instead of telling the truth about the ring, Danny devises a scheme to hide the truth about the ring. He then decides to enlist the help of his assistant to pose as his wife in order to convince his dream girl of his impending divorce. There’s only one problem, Danny can’t seem to end one lie without starting another. The lies and the comedy mount as Danny tries to “Just Go With It.” 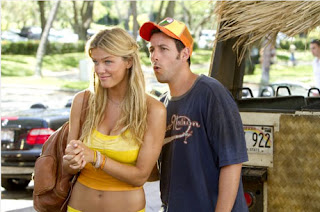 Just Go With It is a highly pleasant, highly amusing circus that hysterically showcases the power of lying. The film’s jocular approach to lying is the overriding theme of the film. The modern obsession with cosmetic surgery is an example of that particular theme and Just Go with It hilariously mocks them both: the lies of the physical nature (cosmetic surgeries) and the verbal. In addition to the film’s overriding theme of lies and deception, the film has a number of warm messages about family and the importance of fathers to the family dynamic. 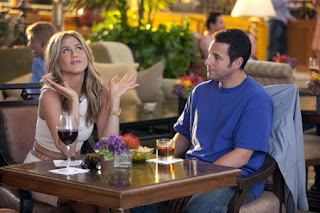 It is highlighted by a number of entertaining performances. Adam Sandler and Jennifer Aniston make a terrific comedy duo. Sandler is still on top of his game as he delivers an enjoyable, more subtle performance in Just Go With It. He doesn’t use as much of the ridiculous, over the top, slapstick humor that he has come to be known for. Instead, Sandler displays a great level of versatility as he uses more wit and banter to exercise his comedic talent. He cleverly finds the right moment to induce a dose of the “classic Sandler” in order to maximize the comedic effect. Thankfully, Sandler’s talent and charisma rub off on Aniston, forcing her to step up her performance and match his. Aniston wonderfully redeems herself after a number of dismal, cataclysmic films like the Bounty Hunter. She gives one of her better performances that is both witty and charming. Sandler and Anniston’s comedic jockeying was some of the best parts of this enchanting treat. 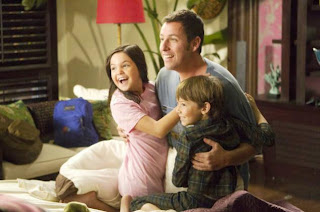 The kids are a hidden treat of the movie. They are terrifically amusing. Baliee Madison (Maggie) and Griffin Gluck (Michael) have some of the best moments in the film. Young Baliee Madison in particular steals nearly every scene that she appears in. All of the children that comprise the various parts of the film make a number of excellent scene stealing cameos to the comedic debauchery. In addition to the kids, Nick Swardson provides great comic support as Eddie, Danny best friend. Just Go With it also features a number of returning “Sandler-friendly” actors who all make their usual cameos in most of the Sandler creations.
The film is an enjoyable ruckus that will delight throughout. It’s an appealing family-friendly film that will entertain every member of the family. The cast as has great chemistry, as they bring this circus of comedic decadence to life. The combination of Sandler and Anniston is terrific. The movie is a lot of fun and will delight its viewers throughout. 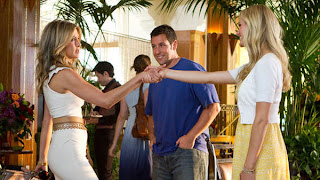