Priest: A Clever Concept Muddled in a Lackluster Delivery 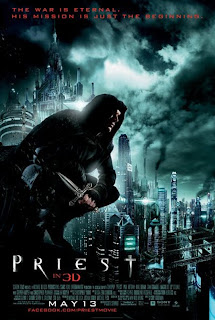 
Hollywood’s inexhaustible obsession with vampires rages on! Priest is one of the more recent uses of the legendary character. The film uses a fairly entertaining intermingling of sci-fi and horror that entails a story of an age-old confrontation between mankind and vampires. The film stars Paul Bettany (The Tourist), Karl Urban (Star Trek 2009), Cam Gigandet (Easy A), Maggie Q (Live Free or Die Hard), Christopher Plummer (The Imaginarium of Dr. Parnassus), and Brad Dourif (Halloween II 2009).


Priest is an idealistic, action-oriented story of faith, isolation, and sacrifice. The film is a moderately
enjoyable commingling of science fiction and horror. This is a futuristic, post apocalyptic tale which tells the story of an elite order of priest that are super soldiers/vampire slayers who were able to defeat the vampires and restore control of the world to the humans. The film is based on the Japanese graphic novel by Min-Woo Hyung .