The Thing (2011): A Good Reimagining but lacks the chills of the version 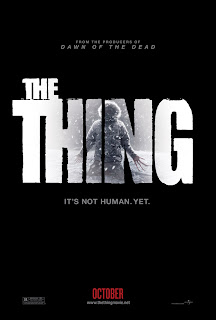 Rating:
***1/2
In Hollywood’s unmitigated and unrelenting efforts to remake every movie imaginable, The Thing is one of the latest films, to get a redo. The Thing is one of the few of the insane amount of remakes/ re-imaginings that does its predecessor a credit. It’s innovative, enjoyable endeavor that is created to serve as a precursor to one of the truly great horror movies of the early 1980’s, John Carpenter’s The Thing. The film stars Mary Elizabeth Winstead (Scott Pilgrim vs. The World), Joel Eggerton (Warrior), Adewale Akinnouye Agbaje (Faster), and Eric Christian Olsen (The Back-Up Plan).

The Thing is an entertaining, inventive aberration that makes a commendable attempt to reintroduce a classic story a new generation of viewers. The Thing is a prequel that reveals the discovery of the extraterrestrial and the events that lead up to the beginning of the 1982 film. This retelling of the tale encompasses the story of the first team of scientists who actually unearth the “Thing” from its icy grave. It’s the second film to bear the name (The Thing 1982) and the third film to be based on the story “Who Goes There?” by John Campbell. The other movie was named “The Thing From Another World” (1951).


Continue reading on Examiner.com Movie review: The Thing (2011): Good but lacks the chills of the prior version - Baltimore Movies | Examiner.com http://www.examiner.com/movies-in-baltimore/movie-review-the-thing-2011-good-but-lacks-the-chills-of-the-prior-version-review#ixzz1cOtMBNro
Posted by Da'Mon at 6:20 PM