Batman: Under the Red Hood 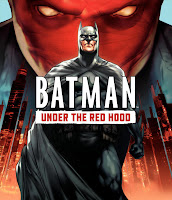 Batman: Under the Red Hood is one of the best animated movies in some time. It features a compelling storyline as well as great traditional animation. it’s a great combination of action, mystery and suspense. This latest tale adds a new dimension to the ever evolving character of Batman. The movie showcases a great voice cast that utilizes the talents of Bruce Greenwood (Double Jeopardy, Star Trek), Jensen Ackles (Supernatural, My Bloody Valentine), Neil Patrick Harris (How I Met Your Mother, Doogie Houser), and John DiMaggio (Futurama). The movie is loosely based upon two of DC comics greatest selling mini series. (A Death in the Family and Batman: Hood)


The movie begins with the death of Robin at the hands of Batman’s archenemy, the Joker (John Dimaggio). Batman (Bruce Greenwood) races furiously to save his partner but fails as he witnesses his death. The story then picks up 5 years later as Batman is in hot pursuit of a new villain, the Red Hood (Jensen Ackles). The Red Hood is Gotham’s latest vigilante. He takes no prisoners as he uses many of Batman’s methods but the Red Hood takes it one step further. He has no problem with killing anyone who may pose a problem in his conquest of Gotham city‘s underworld.


Batman: Under the Red Hood digs deep into the character of Batman as it shows us multiple layers to his personality that is not often displayed. We see his vulnerability as he revisit’s the father figure/ partnership that he lost when Robin was killed. We are also shown how he has struggled with the grief or Robin’s death and his subsequent failure to save him. This movie makes Batman real. In showing us his flaws, the movie grounds him. It adds a human and more real aspect to the larger than life persona of Batman. We get a new take on the character of Batman in his quest to unmask and defeat the Red Hood.

The other main characters in Under the Red Hood are equally portrayed very well. Each of them add a distinct element to the story. The Joker is played at his maniacal best right from the start. His crazed, psychopathic, are on full display as he adds to the mayhem that Batman must overcome. Nightwing, the first Robin, brings a bit of humor to this otherwise dark movie. The Red Hood gives a view of Batman’s dark side. He shows us what Batman could become if ever lost sight of his sense of justice.

Batman: Under the Red Hood is a great movie. Comic book Lovers as well as casual fans will be satisfied when you watch it. This is one of those transcendent movies that becomes more than a good animated film. It’s an excellent view and a great buy. This movie is one of those rare films like The Dark Knight that becomes more than just a good “comic book” movie but it becomes a good movie. Don’t sleep on this because it’s a cartoon or because it’s one of those “superhero” movies. Give it a chance and you will not be disappointed. Batman: Under The Red Hood has definitely become one of my instant classics.
Posted by Da'Mon at 10:37 AM