Be Kind Rewind: "A Heartwarming Story that is Shrodded in Silliness" 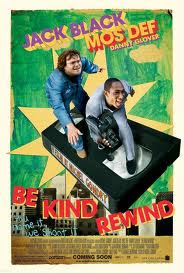 Rating:
***
By Da’Mon Guy
Be Kind Rewind is a lesser known comedy that premiered in 2008 in limited release. It's a touching comedy for the lovers of silly movies. Its illogical and almost dumb at times but that is wherein the enjoyment resides. This seemingly silly movie has a really warm message buried beneath its humor. Mos Def and Jack Black highlight a really good cast that includes Danny Glover, Melonie Diaz, Sigourney Weaver, and Mia Farrow.

Mos Def and Jack Black star as two best friends who live in a small town, Passaic NJ. The two are very good friends but with different ambitions. Mos Def plays Mike, a video store clerk, who seeks the approval of Mr. Fletcher played by Danny Glover. Mr. Fletcher is Mike’s father figure and he eagerly wants to please him. Jack Black is Jerry, a mechanic with a few screws loose. Jerry has aspirations of stardom but no way to achieve it. Jerry’s chance for stardom comes when accidentally erases all of the VHS tapes during a visit to the “Be Kind Rewind” video store after a freak accident. Mike (Mos Def) has been left to run the video store in Mr. Fletcher’s absence and since he doesn’t want to disappoint Mr. Fletcher he quickly tries to conceal the accident. He devises a plan for he and Jerry to re enact the erased version of the movies. These versions of the movies later become known as “Sweded.” Mike and Jerry's "sweded" versions quickly become the talk of the town and the two instantly achieve a level of stardom that Jerry quickly takes to.

Mos Def and Jack Black have really good on screen camaraderie as best friends and the “Sweded” versions of the movie create situations for all kinds of humor to unfold. As we watch the pair redo some of the best known Hollywood best know films such as Ghostbusters, Rush Hour, and 2001 a space odyssey. Jack Black’s portrayal of Jackie Chan is extremely entertaining.

The message of the movie that is masked within the comedy is ingenuity, friendship, and people coming together as the two quickly learn that the video store is to be demolished. The devise a plan to raise money and the towns viewers of the “sweded” versions of the films all pitch in.

The first 20 or so minutes of the movie is almost too silly to watch but if you can survive the silliness then you are in for a real treat. Be Kind Rewind is a comedy on the surface but it really has a lot of messages that makes this a very family friendly movie. The exchanges between Mos Def and Jack are at the core of the entertainment of the movie. They provide great comic relief in the delivery of the more subtle messages of friendships, creativity, and the sheer belief in yourself. I really liked the movie in spite of the silliness at the start. I would give it 3 stars. If you want to see the entire "sweded" versions of the movies that Mike and Jerry created you can go to bekindrewind-themovie.com
Posted by Da'Mon at 11:30 PM