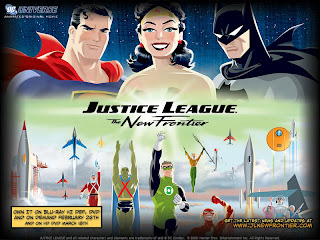 
Justice League: New Frontier is an entertaining animated feature that premiered in 2008. The film implements a mature-themed outlook on the creation of the Justice League of America (JLA) that employs a real life outlook on the world of DC comic’s famed characters. The movie occurs in early 1950’s also known as the Silver Age of comics. It’s an engaging story that unfolds like an old fashioned mystery of the era that the story occurs in. It manages to interweave the origins of a few of the Leaguers such as Green Lantern and Martian Manhunter, as well as what made Batman choose a sidekick. It’s an creative use of the characters of the DC universe. New Frontier allows for many other characters from the various titles in the DC universe to make an appearance in the film as well. In addition to the JLA, there are characters that are introduced such as Blackhawks, Adam Strange, Wildcat, Mr. Freeze, and Gorilla Grood just to name a few.