Assassination Games (2011): An action movie without any true punch 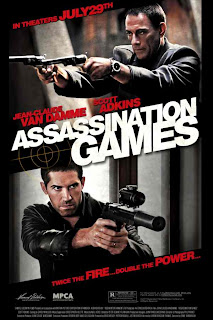 Rating:
**
By: Da'Mon Guy
The success of DVDs and Blu-rays have sparked an unmitigated rise in the production of direct to video releases. This rise has spurned both positive and negative results. It has been a way to give movie lovers a look as some films that may never make it to the big screen however in the same process it had dramatically increased the number of extremely mediocre films that premiere on video ten fold. The good movies are a rare gem among the multitude of abysmal ones. Assignation Games (Rated R) is one of the movies that teeters the line of being enjoyable and being another victim of the direct to video tragedies. This feature debuted in 2011. The movie stars Jean-Claude Van Damme (Kung Fu Panda 2), Scott Adkins (Undisputed 3: Redemption), Kevin Chapman (Unstoppable), Ivan Kaye (Layer Cake), Andrew French (Exorcist: The Beginning), and Serban Cela (Ursul).

Assignation Games is a moderately entertaining, action-orientated happenstance about a pair of contract killers form an unlikely partnership to eliminate an international drug overlord. The film shows how a bond can be formed out of the strangest commonality. It’s a decent action movie that intertwines themes of love, atonement, and friendship within this unlikely tale.