Super: An enjoyable intersection of reality and ridiculous 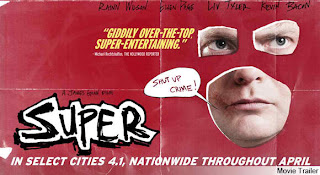 Rating:
***
By: Da'Mon Guy
﻿
The rage in modern movie making that has taken over the film industry in the last decade has been bringing comic books to the silver screen. Hollywood has furiously been using a number of ideas to spurn films. Some good some not so good. One of the more uncommon outlooks on the usage of the genre has been the dark comedy. Films like Kick-Ass and Defendor are great examples of the alternative approaches that attempt to satisfy movie enthusiasts infatuation with the genre.

Super is a offbeat approach to one of the raging trends in modern movie making. It’s a good combination of action and brutal violence that is commingled with a bit of twisted humor to bring one of the more original takes on the superhero love affair between the public and film industry. The movie stars Rainn Wilson (Transformers: Revenge of the Fallen), Liv Tyler (The Incredible Hulk), Ellen Page (Inception), Kevin Bacon (X-Men: First Class), Nathan Fillion (Justice League: Doom), and Michael Rooker (Mysteria).
To continue reading, click the link:
http://www.examiner.com/review/dvd-review-super-2010-an-enjoyable-intersection-of-reality-and-ridiculous﻿
Posted by Da'Mon at 1:32 PM