The Butterfly Effect 3: The third time is a charm 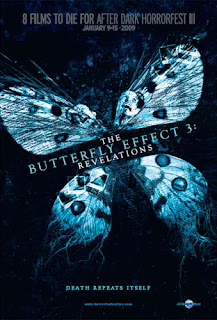 Butterfly Effect 3: Revelations is an intimate, interesting convergence of sci-fi, suspense, and drama that revolves around a serious of murders and the events the circumstances that can arise by altering the fate of one person. The film poses a mind boggling approach to supernatural whodunit. The film debuted in 2009. The film stars Chris Carmack (Shark Night), Rachael Miner (Repicas), Melissa Jones (Retardead), Kevin Yon (The Five Year Engagement), Lynch R. Travis (Dogman), and Sarah Habel (Whip It). ﻿
Continue reading, click the link:
http://www.examiner.com/review/dvd-review-the-butterfly-effect-3-revelations-2009-the-third-time-is-a-charm
﻿
Posted by Da'Mon at 1:49 PM