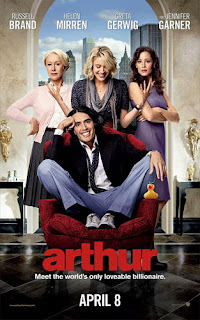 Rating:
*
By: Da'Mon Guy
﻿
Arthur is an substandard, moronic happenstance that attempts to entertain its audience though a multitude of idiotic, unfunny circumstances. The film is a thankless mishap that offers some brief flickers of the warm story that is embedded within the madness. The film stars Russell Brand (Get Him to the Greek), Hellen Mirren (State of Play), Greta Gerwig (No Strings Attached), Jennifer Garner (The Kingdom), Nick Nolte (Zoo Keeper), and Luis Guizmen (The Taking of Pelham 123 2009).


Arthur is a remake of a 1980’s movie of the same name that starred Dudley Moore in the title role. This latest incarnation uses Russell Brand as the instrument of chaotic, comedic carnage. The movie poses a rousing question as it attempts to entertain with the idiotic, child-like behavior of Arthur. Money or love? Arthur is forced to make the choice as we’re forced to intake this disaster.