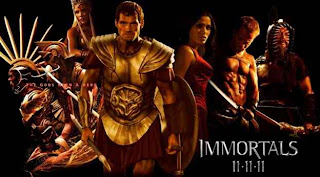 Rating:
***
By: Da'Mon Guy
﻿
Immortals is a graphic, visceral extravaganza that implements the use of stunning visuals as well as an extremely high level of violence and brutality as subterfuge to mask the shortcomings of a lackluster, dreary story. It’s a dreary, melodramatic tale that makes a mishandled attempt to reintroduce some of the elements of great Greek tragedies to a modern audience but it simply comes up short. The film stars Henry Cavill (Stardust), Mickey Rourke (The Expendables), Stephen Douriff (Buck Larson: Born to be a Star), Freda Pinto (Rise of the Planet of the Apes), Luke Evans (The Three Musketeers), John Hurt (Harry Potter and the Deathly Hallows: Pt. 2), and Anne Day-Jones (Source Code).


Immortals is a violent, brutal exhibition that miserably tries to intermingle some of the timeless elements of age old story telling such as tyranny, treachery, and faith with modern groundbreaking visual effects. It’s a bungled waste of terrific visual effects as the boorish nature of a dreary narrative deprive the true enjoyment of it. The film is the story of a faithless man who was able to attain a place amongst the Greek gods.