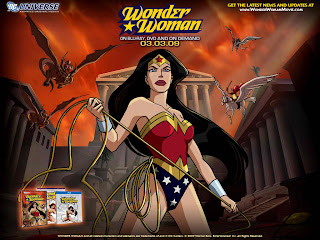 Rating:
****1/2
By: Da'Mon Guy
﻿
Wonder Woman is a pragmatic, multifaceted epic that entertainingly updates and recreates the origin story of one of the oldest characters in comics. The film is an animated celebration of femininity that aptly depicts the character of Wonder Woman as a superhero on par with the more highly touted male superheroes. The movie stars Keri Russell (Extraordinary Measures), Alfred Molina (Rango), Nathan Fillion (Green Lantern: Emerald Knights), Rosario Dawson (Zookeeper), and Virginia Madsen (Red Riding Hood).


Wonder Woman is a hardnosed, revitalizing adventure that sheds a new perspective on one of DC comics “Holy Trinity” of cornerstone superheroes (The other two are Superman and Batman).The film is an exciting modernization of the oldest female heroine in modern comics. The character of Wonder Woman was created by William Moulton Marston and debuted in All Star Comics #8 in 1941. This is an action-packed undertaking that features an unmatched level of brutality in a DC comics animated feature.