Bridesmaids: Funny but not as hirlarious as advertised 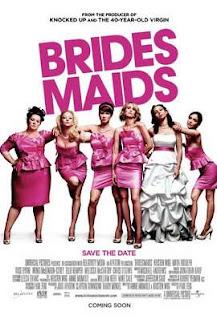 Rating:
**1/2
By: Da'Mon Guy
Bridesmaids is an moderately entertaining, unorthodox commingling of rauchiness, senselessness and zaniness. The film uses an uncommon approach to comedy that is sparsely laced with moments of comedy however, it doesn’t quite measure up to the hype that surrounded it during its stint in the theaters over this past summer. The movie stars Kristen Wiig (Whip It), Mya Randolph (MacGrubber), Rose Byrne (Insidious), Melissa McCarthy (The Back-Up Plan), Chris O’Dowd (Gulliver’s Travels), John Hamm (The Town), and Terry Crews (The Expendables).

Bridesmaids is a humorous, crude farce about the true test of friendship through time and change. The film uses a jocular approach to tell the story of two lifelong friends whose lives have taken two completely contrasting directions. As one has found a happy and healthy relationship, the other’s life has taken a turn in the opposite direction. This is a comedy that is truly a story of a woman that has lost her way in life. Annie (Wiig) is at a crossroads in her professional and personal life but it all boils to a head when her best friend’s life is set to undergo a drastic change. Annie begins to question the bond between the two as it is tested because of change. At the core of this misleading debacle is the warm story of two friends who‘s lives have taken different directions causing the nature of their childhood friendship to change. After Lillian (Randolph) announces her marriage, Annie discovers the relationship between Helen (Byrne) and Lillian. Soon after, a competition for the bride’s friendship develops. A lot of the humor is focused on the budding rivalry between the childhood friend vs. the now current friend. The film revolves around the jealousy that Annie feels towards Helen as she has become Lillian’s seemingly new best friend.