The Ward: A lackluster attempt at horror 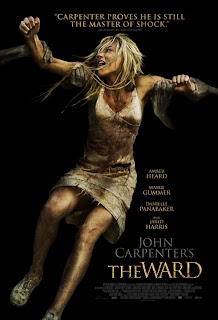 Rating:
**
By: Da'Mon Guy
John Carpenter’s The Ward is a dreadful, inexplicable catastrophe that blurs the lines of reality in a depressing effort to tell the story of a series of eerie murders that occur in a mental institution. The chills are far and few between as it lacks any suspense to be considered a tale of terror. The movie stars Amber Heard (Drive Angry), Mamie Gummer (Twelve Thirty), Danielle Panabaker (The Crazies), Laura Liegh (Numbers “TV series“), Lyndsy Fonseca (Kick-Ass), and Jared Harris (The Curious Case of Benjamin Button).


John Carpenter’s The Ward is a boorish, disappointing chore of viewing that hobbles along as it fails to justify being labeled a horror/suspense film. This lame exhibition occurs in 1966. The story revolves around the unexplained disappearances of some of the patients in a mental institution. It tries to create a level of psychosis within a tale of the supernatural as a ghost appears to be responsible for the mysterious vanishing of the patients. The movie premiered in limited release in the late summer of 2011.

for the full review continue reading at:
http://www.examiner.com/movies-in-baltimore/dvd-review-the-ward-a-lackluster-attempt-at-horror-review﻿