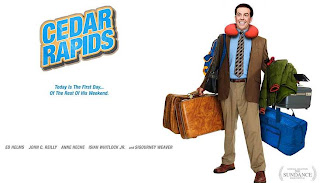 Rating:
**1/2
By: Da'Mon Guy
Movie studios tend to find whatever they can use to draw fans to a movie. Once an actor does well received film, movie studios quickly line up to give them a starring role in some crappy, less then stellar production to try to grab a quick buck. Cedar Rapids is an example of just that. Cedar Rapids is a modest, slightly enjoyable jest that makes a pedestrian attempt to capitalize on the naiveté of a dim witted underachiever. It’s a mildly humorous romp that pokes fun at the world of insurance salesman and the crazy antics that occur during a wild weekend convention. The movie stars Ed Helms (The Hangover pt. 2), John C. Reily (Step Brothers), Sigourney Weaver (Paul), Anne Heche (The Other Guys), Kurtwood Smith (That 70‘s Show: TV series), and Isiah Whitlock, Jr (Brooklyn‘s Finest).


Cedar Rapids is the story of a nonsensical, sheltered dullard who attempts to capitalize on a career opportunity. It’s a direct to DVD feature that premiered in early 2011. The film attempts to capitalize on the success of the Hangover movies by featuring one of its stars Ed Helms. It’s a inconspicuous film is about the transition of life and how one deals with change. It questions morality and integrity.