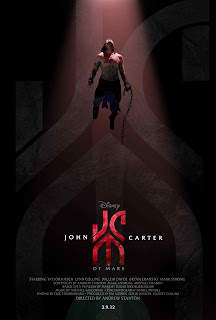 Rating:
****1/2
By: Da'Mon Guy
The Science fiction movie genre just doesn’t possess the spellbinding pizzazz that they once had. They simply aren’t what they used to be as the modern science fiction movies has been on decline. There are fewer and fewer “out of this world” features that make it to the theaters and even fewer that are worth watching. The days of the great sci-fi extravaganzas like Star Wars and Star Trek are almost a fond memory but just when it looks like all hope is lost, Walt Disney swoops in to save the day with the premiere of John Carter. John Carter is a creative, enjoyable intersection of sci-fi, action, and romance. It’s a welcomed addition that reinvigorates a dying genre. The movie stars Taylor Kitsch (Wolverine: X-Men: Origins), Lynn Collins (Wolverine: X-Men: Origins), Dominic West (Punisher: War Zone), Cirran Hines (The Debt), James Purefoy (Ironclad) and Mark Strong (Green Lantern). It also features the voices of Willem Dafoe (Cirque De Freak: The Vampire‘s Assistant), Samantha Morton (The Messenger), and Thomas Hayden Church (Easy A).


Walt Disney’s John Carter is an revitalizing, enjoyable fable which transcends time, space, & imagination. This enjoyable narrative is a family friendly, multifaceted extravaganza about a confederate soldier who is accidentally transported to a foreign but familiar world and then becomes their messiah. It’s the newest blockbuster film from Walt Disney that is easily the best film of the year so far and becomes the first must see movie of 2012.