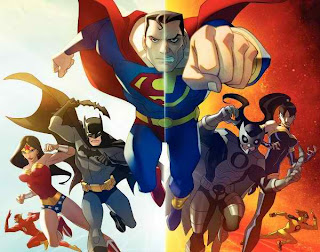 DC Comics is clearly the better of the two comic book giants when it comes to releasing animated feature films. DC Comics animated studios has produced a number of direct to video features that highlight today’s modern mythological marvels who grace the pages of their comics. In recent years, they have turned out a number of great animated features that nearly make up for the lack of success on the big screen. While they may not be able to match Marvel’s big screen success, DC Comics is unmatched in their delivery of great animated features. Justice League: Crisis on Two Earths is no different. This film is an action packed, dazzling showcase that creatively commingles a high level of realism with an entertaining sci-fi premise to breathe life into an animated adventure that is comprised of DC comics super team of heroes, The Justice League. The movie is an enjoyable variation that manages to intermingle elements of life, death and sacrifice into one of the tales of the Justice League. The film stars Mark Harmon (NCIS: TV series), James Woods (Straw Dogs 2011), James Patrick Stewart (Batman: Year One), William Baldwin (Forgetting Sarah Marshall), Gina Torres (The Matrix Reloaded), Brian Bloom (The A-Team 2010), Chris Noth (Sex and the City 1&2), and Vanessa Marshall (Dante‘s Inferno: The Animated Epic).


For the full review, Click the link:
http://www.examiner.com/review/dvd-review-justice-league-crisis-on-two-earths-2010-don-t-miss-it﻿
Posted by Da'Mon at 5:52 PM