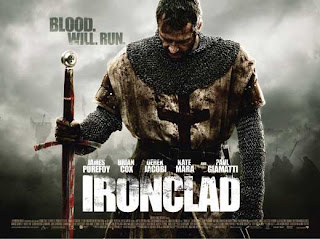 There’s something about a good blood and guts movie. It’s a visual jolt of adrenaline for movie lovers. Motion picures like Braveheart, Gladiator, and 300 are instant classics that despite the violent nature of the film, the compelling stories coupled with the insane violence, endear themselves to movie fans. Ironclad is a violent, gory exhibition that is a bloody tale of right versus might. The film is based on the historical events that surrounded the events that followed after King John signed a treaty in the 13th century. The film tells of the untold efforts of the King to regain his tyrannical power over England. The movie stars James Puerfoy (John Carter), Paul Giamatti (Win Win), Bryan Cox (Red), Derek Jacobi (My Week with Marilyn), and Kate Mara (Iron Man 2).

Ironclad is a brutal, ferocious direct to DVD action flick that premiered in early 2011. It tells the story of the courageous stand of a mismatched band of warriors who attempt to thwart the merciless army of King John as he attempts to regain his thrown. They defend the last stronghold in order to stave off his maniacal effort to regain his tyranny and his attempts to overrun a castle at Rochester.

To continue reading, click the link below:
http://www.examiner.com/review/dvd-review-ironclad-2011-a-midly-entertaining-exhibition-of-violence﻿
Posted by Da'Mon at 7:30 PM