Wrong Turn 4 Bloody Beginnings: Bad to worse in a heartbeat 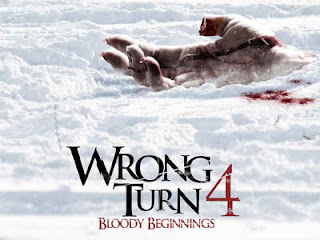 ﻿
If a movie even has some moderate level of success then movie lovers should expect a sequel. Sometimes however, the film doesn’t create enough of a following to get the big Hollywood treatment but it is profitable enough to spawn a direct to video addition to the franchise and more often than not, once it goes this route, it goes wrong. Wrong Turn 4: Bloody Beginnings (Unrated) is a begrudging, vomit-inducing, blood and guts gore fest. This catastrophe is a grotesque, mind-numbing calamity that is nothing more than outrageous induction of the usage of an insane amount of ridiculous violence and senseless. It is just the latest example of a good film that has spawned a series of bad direct to video sequels. The movie stars name Sean Skene (The Haunting in Connecuit), Dan Skene (The Lookout), Blaine Cyrpuda (New In Town), Jennifer Padavick (Love at First Kill), and Tenika Davis (Jumping The Broom).


Wrong Turn 4: Bloody Beginnings is gory and grotesque. The film tells the story of the origins of the trio of deformed, ravenous inhabitants of the woods of West Virginia. It really delves into the origin of the trio, explaining how and why they became what they are. That aspect is one of the few positives that this mind-numbing travesty has going for it.

For the full review, click the link below:
http://www.examiner.com/review/dvd-review-wrong-turn-4-bloody-beginnings-bad-to-worse-a-heartbeat
Posted by Da'Mon at 2:14 PM