Wrath of the Titans: Great action with no substance 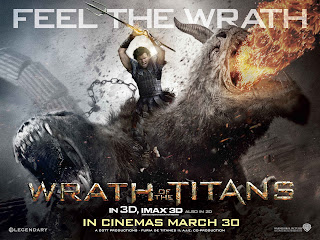 As if the 2010 Clash of the Titans didn’t ravage the 1983 film enough, the raping of that good movie persists as Wrath of the Titans completely expunges the good memory of that classic. Wrath of the Titans is a the latest lackluster happenstance to implements the use of great visual effects as subterfuge in an attempt to shift the focus from the shortcomings of a substandard, dreary tale. The film stars Sam Worthington (Man on a Ledge), Liam Neeson (The Grey), Ralph Fiennes (Harry Potter and the Deathly Hallow pt. 2), Bill Nighy (Pirates of the Caribbean: At Worlds End), Rosemund Pike (Clash of the Titans), Danny Houston (The Warrior‘s Way), Toby Kebbel (War Horse), John Bell (Battleship), and Edgar Ramiriez Arellano (Vantage Point).


Wrath of the Titans is an action oriented, not so epic adventure as it’s the unnecessary, sequel to the 2010 film, Clash of the Titans, used 1983 film of the same name as a foundation for its creation. This film is a mangled, mismanaged narrative of the belief/perseverance of humanity as this tale tells of the demise of the great figures known as the gods of Greek mythology. It follows the current trend of many of the action tales that are based on Greek mythology, It’s heavy on action and is filled with great visual effects but it completely forgets that a story is supposed to be told in between the action of the film. This film continues to adopt the philosophy from the original film of man versus gods.

To continue reading, click the link below:
http://www.examiner.com/review/movie-review-wrath-of-the-titans-great-action-with-no-substance﻿
Posted by Da'Mon at 7:43 PM