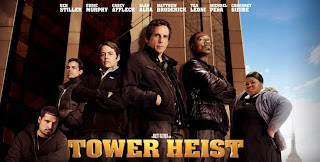 ﻿
Filmmakers try to utilize any thing at their disposal to lure movie enthusiast to the theaters. Often, it’s the content of the film but more often than not its star power. Stars draw fans to movies. The right star can sell even the worst movies. Tower Heist is an example of how stars can seduce an eager movie fan. Tower Heist an underachieving, mundane misappropriation of talent. This disappointing mishap is a laymen’s version of Ocean’s Eleven that fails to capitalize on the talent of a pair of comedic greats, Ben Stiller and Eddie Murphy. The tragedy is highlighted by an all-star cast featuring the likes of Ben Stiller (Little Fockers), Eddie Murphy (A Thousand Words), Alan Alda (Flash of Genius), Matthew Broderick (New Year's Eve), Casey Affleck (Gone Baby Gone), Judd Hirsch (A Beautiful Mind), Tea Leaoni (Ghost Town), Michael Pena (Battle: Los Angles) and Gabourey Sidbrie (Precious).

Tower Heist is a lackluster, disappointing exploitation of star power. It’s a run of the mill attempt at humor that tells the story of a staff of hotel employees who attempt to steal the money of their former employer who embezzled them. The film premiered in late 2011. The movie revolves around the uninspiring battle of wits between Shaw (Alda) and Kovacks (Stiller).

To continue reading, click the link below:
http://www.examiner.com/review/dvd-review-tower-heist-2011-an-underachieving-exploitation-of-talent
Posted by Da'Mon at 7:04 PM