Killer Elite: An Action-Oriented Excursion into the 80's 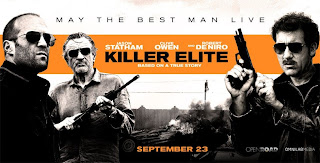 In the modern era of filmmaking, one of the former staples of movie genres, the action movie gets a welcome addition. Despite the success of action movies, there aren’t many true action stars. Hollywood’s only true action star, Jason Statham continues to add to his impressive resume. Statham’s latest film, Killer Elite is an off beat combination of suspense and action. Its a multi-layered story that has a good level of entertainment. The movie stars Jason Statham (Blitz), Clive Owen (Trust), Robert DeNiro (Limitless), Dominic Purcell (Straw Dogs), Aden Young (The Tree), and Yvonne Strahovski (Matching Jack).

Killer Elite is enjoyable, action oriented excursion into yesteryear. The movie is an entertaining, fact based tale of loyalty and friendship that is based on true events that were described in a book, The Feather Men by Sir Ranulph Fiennes that was released in 1991. The movie occurs in 1980-1981, 30 years ago sets the stage for an enjoyable action thriller that harkens back to great spy thrillers like The Package. The film has incorporates a number of elements such as conspiracy theories, the love story, and of course some first rate action to breathe life into this intriguing, larger than life spectacle.