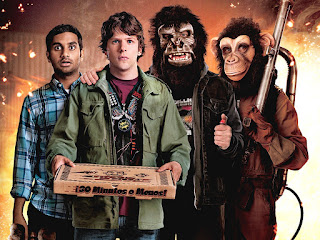 ﻿
The saying that youth is wasted on the young is a saying that aptly applies to a number of comedies that are geared towards the notion that today’s youth will laugh at most anything. There as so many comedies that are created that hardly induce any level of humor to someone over the age of 18. 30 Minutes or Less is a an example of Hollywood’s chance to capitlialize on the naiveté of young movie lovers. This catastrophe stars Jessie Eisenberg (The Social Network), Danny McBride (Your Highness), Aziz Asnari, Nick Swarson (Bucky Larson: Born to be a Star), Michael Pena (Tower Heist), and Fred Ward (The Adventures of Remo Williams).


30 Minutes or Less is a hair-brained, humdrum adolescent farce that is laced with obscenities and vulgarities. It’s an extremely lame, flat line of a comedy that doesn’t even garner the attention of watching the trailer. This inexcusable waste of time has more obscenities than it does humor. The movie premiered in late 2011, The film focuses on the hair brained scheme of two slackers to force a young pizza delivery boy to rob a bank by strapping a bomb to him.

for the entire review, click the link below:
http://www.examiner.com/review/dvd-review-30-minutes-or-less-2011-a-teen-focused-humorless-depravity
Posted by Da'Mon at 2:18 PM