Cars 2: It does't quite measure up to the first 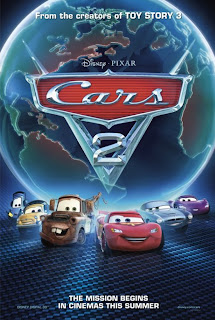 Rating:
***
By: Da'Mon Guy
The Walt Disney studios constantly finds a way to continually keep the younger movie goers flocking to their films. After the debut of the mega hit film, Cars (2006), the studio decided to further explore the adventures of the animated version of the odd couple, Lightning McQueen and TowMater. This highly unlikely pairing return for more vehicular comedy as Cars 2 hit the theaters in 2011. Cars 2 is a moderately enjoyable, humorous sequel to the hit film that took audiences by storm. The film implements the use of personification of vehicular adventure to tell the story of true friendship and self acceptance. The movie is accompanied by an all-star voice cast that features the likes of Owen Wilson (Little Fockers), Larry the Cable Guy (The Tooth Fairy 2), Michael Caine (The Dark Knight), Emily Mortimer (Hugo), and John Tuturro (Transformers: Dark of the Moon).


Cars 2 is a theme driven adventure of friendship and acceptance that is intertwined with a James Bond like spy theme. The return of Lightening McQueen and Tow Mater. All of the gadgets that wow audiences in the spy themed movies make an appearance.


Continue reading on Examiner.com DVD review: Cars 2 (2011): Doesn't measure up to the first - Baltimore Movies | Examiner.com http://www.examiner.com/movies-in-baltimore/dvd-review-cars-2-doesn-t-measure-up-to-the-first-review#ixzz1qc02Ud1C﻿
Posted by Da'Mon at 10:52 AM