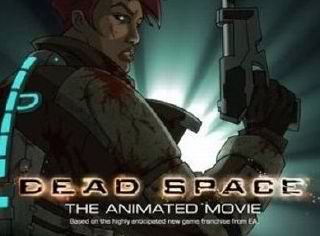 Rating:
***1/2
By: Da'Mon Guy
﻿
In recent years, video games have become a main stay in modern society. They have also become an extremely useful resource for the creation of films just as much as books and other resources. Since many games already have a devout, pre-existing fan base, it only makes sense to attempt to build on some of these modern-day superstars. The games have developed such a great following that they expand their tales to other forms of media such as film and anime. Dead Space: Downfall is an example of just that. This feature is a chilling, unique combination of sci-fi, horror and anime. The film features the voice talents of Bruce Boxleightner (Tron: Legacy), Nika Futterman (Open Season 3), Kelly Hu (Green Latern: Emerald Knights), and Phil Morris (Justice League: Doom).


Dead Space: Downfall is an adult-themed, futuristic tale that intermingles an eerie, suspenseful mystery with an action-oriented sci-fi adventure to bring to life the crucial back story to the Electronic Arts video game of the same name. The animated feature premiered in 2008. The film is filled with vulgarity and obscenities and it does not pull any punches. Despite of using anime as a vehicle to tell this story, there is nothing kid-like about this horrific tale of terror.