Apollo 18: An Insipid Waste of a Good Concept 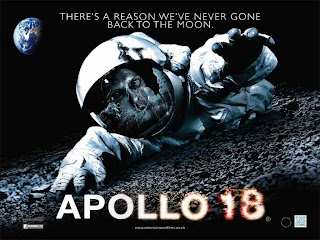 Rating:
*1/2
By: Da'Mon Guy
﻿
Science fiction movies, a once thriving, revered commodity in Hollywood, are now just a little more than an afterthought. There were great film franchises like Star Wars and Star Trek which made sci-fi household and reshaped the way that movie lovers perceived the genre. It was cool to be a geek and even those who weren’t would allow their inner geek to come out once in a while. However, those days are long gone. Now, sci-fi lovers are stuck reaching for excrement like Apollo 18. It is a film that speaks volumes about the sad state of science fiction in Hollywood. The film’s release in the theaters was delayed two times for undisclosed reasons. However, it would have been better served to never be released at all.


Apollo 18 is a mishandled, slow moving snooze fest. The film is a dreary, tedious fiasco that offers a very minimal amount of satisfaction as it seduces lovers of science fiction with the promise of something special. The film is a lackluster effort to infuse a reality based concept with a sci-fi/ horror story in a mildly successful attempt to grant a new perspective on


Continue reading on Examiner.com DVD review: Apollo 18: An insipid waste of a good concept - Baltimore Movies | Examiner.com http://www.examiner.com/movies-in-baltimore/dvd-review-apollo-18-an-insipid-waste-of-a-good-concept-review#ixzz1n7Hl41EK
﻿
Posted by Da'Mon at 8:23 AM