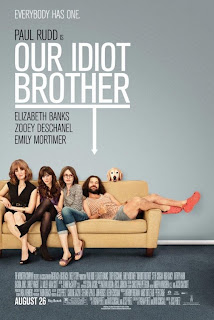 Rating:
*1/2
By: Da'Mon Guy
Our Idiot Brother is a dim-witted, mind numbing charade that barely delivers any level of comedic satisfaction. It’s a tedious, humorless farce that gives the false impression that it’s a slapstick outing, however it is easily one of the worse films of the year. This catastrophe tries to tell the story of a quirky, dim-witted stoner’s ineptitude who manages to bring his family together in the process of finding his place in the world. The film stars Paul Rudd (How Do You Know), Zooey Deschanel (Your Highness), Elizabeth Banks (The Next Three Days), Emily Mortimer (Cars 2), T. J. Miller (She’s Out of My League), Kathryn Haun (Step-Brothers), and Steve Coogan (The Other Guys).


Our Idiot Brother is a mind-boggling, slow moving stupor of a comedy that attempts to embellish on the misfortune of a dullard. The film has a number of shortcomings; the biggest is that too much of the film relies on poking fun at the ineptitude of Ned (Paul Rudd). Ned’s candor and naiveté give way to multiple problematic situations as the film is really just a number of incoherent scenarios that showcase Ned incompetence and try to force a jocular response out of it. The humor is nearly non-existent as this depressing happenstance is jam-packed with a inexcusable number of cricket spurring moments that too often miss the mark. ﻿