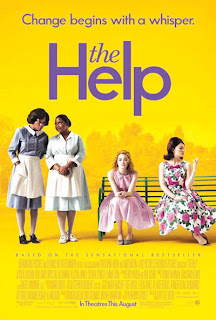 Rating:
****1/2
By: Da'Mon Guy
There are those movies that debut and become more than just a film. The Help is one of those movies. It’s not just a movie; it’s an event. The nature of the subject matter is extremely sensitive but once it’s coupled with great acting, the film becomes a phenomena. It’s a captivating, enlightening testament of friendship and perseverance. The film is a wonderfully, entertaining story of a trio of women who form an unlikely bond that transcends race, hate, and discrimination in the process of bringing to light the stories of the domestic help. The film stars Emma Stone (Crazy Stupid Love), Bryce Dallas Howard (Hereafter), Cicely Tyson (Why Did I Get Married Too), Mary Steambergen (The Proposal), Viola Davis (Knight and Day), Octavia Spenser (Dinner for Schumks), and Sissy Spacek (Four Christmases).


The Help is a multifaceted extravaganza that delivers an riveting perspective on racial injustice and discrimination. It’s a movie lover’s movie; one that reminds you why you love film. It’s a gripping narrative that is based on the events that brought together the creation of a book that was based on the real life accounts of some negro women who aspired beyond racial discrimination and intolerance to voice their struggles during the civil rights movement of the 1960’s. The film is based on the events that were brought to life in the best-selling book by Kathryn Stockett that was released in 2009. The book told the true life stories of maids in the south during the civil rights in the 1960’s south Jackson, Mississippi. One woman’s efforts to bring to light the daily trials and tribulations of the maids of the rural south. The book serves as a lightening rod to spark a unifying sentiment that shines above the evil racial injustices of a community. The story of the domestic help is an enlightening journey into the past.

Continue reading on Examiner.com DVD review: The Help (2011): A MUST SEE, one of the best movies of 2011 - Baltimore Movies | Examiner.com http://www.examiner.com/movies-in-baltimore/dvd-review-the-help-2011-a-must-see-one-of-the-best-movies-of-2011-review#ixzz1n7NPEJB9﻿